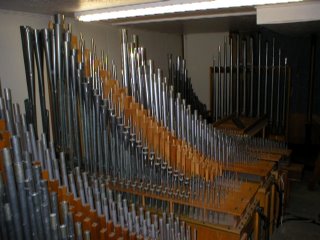 There is a general rule, the adherence to which reduces the chances of making a fool of yourself. Simply, that rule is: make at least some attempt to find out what it is you are pontificating about, before opening your mouth or committing fingers to keyboard. Others have put it better, in terms: "engage brain before opening mouth".

However, since the publication by The Times last week of the story about the possible banning of organs by the EU, any number of politicians have chosen to ignore that rule. They are thus in grave danger of doing precisely what comes so naturally – making fools of themselves.

This comes over with abundant clarity from Booker's column today, under the heading, "Organs will still sound despite the law's confusion".

Few EU directives, Booker writes, have caused more upset in recent times than the one said to threaten the survival of tens of thousands of organs, in cathedrals, churches and concert halls throughout Europe. The suggestion that this law might, in a way it was never intended to, do away with these magnificent musical instruments, which have been at the heart of European culture for centuries, has understandably sent a shock wave across the world.

Yet, astonishingly, he adds – being somewhat kind - it emerges that this furore arises from a basic misunderstanding of the nature of organs, leaving officials and politicians hopelessly at sea in their interpretation of a law that they themselves have framed.

The problem, as we know, began with a Brussels directive, 2002/95 on the Restriction of the Use of Certain Hazardous Substances in Electrical and Electronic Equipment (RoHS). Among the substances which this bans from use in electrical equipment is lead.

We also now know that the metal pipes which produce sound in an organ can only be made from a lead-tin alloy. Nothing else will do, to create their incredible range of tones. The air that passes through these pipes (of which there may be many thousands - the Royal Albert Hall's organ, for example, has 9,999) is usually driven by an electrically-powered blower.

But now we get to the interesting detail. As long ago as January 2001, when RoHS, and a companion directive on the disposal of electrical waste, were first under discussion, Douglas Levey of the Institute of British Organ Building (IBO) wrote to the Department of Trade and Industry to make sure that any ban on lead would not apply to the organ pipes themselves, since these are wholly separate from any parts worked by electricity, such as a blower or electronic controls.

He had no answer to his point, and the directive was issued in 2003, followed last autumn by regulations passing it into UK law. It was now vital to everyone in the organ world that the issue should be clarified before the regulations came into force, on July 1 this year; so last month Mr Levey wrote to the European Commission.

But it became obvious that, since none of the officials involved had properly focused on how organs might be affected by the directive, they were unable to give a clear response. The Commission merely advised that the onus for determining whether any "product" is covered by the directive lies with its "producer", as the "person best placed to assess the characteristics of his product".

That is the nub of the matter. It is for the producer to decide whether their equipment comes within the framework of the directives, and it is therefore, for the IBO to convey its members views to government, and not the other way around.

On this basis the IBO was confident that, though the directive applied to the electrical installations in an organ, it did not apply to the pipes. To identify them as "electrical equipment" would be as absurd as to claim that, if a building is fitted with air conditioning, then the whole structure should be considered as an electric device.

Nevertheless, however clear this has seemed to legal and other experts, it has so far been too much for politicians or officials to grasp. When a DTI minister, Alun Michael, was challenged in the Commons last week, he could only suggest that the organ builders should apply for an "exemption" from the law.

As the IBO explains on its website, this wholly misses the point. First, it implies that organ pipes are covered by the directive (otherwise there would be no need for an exemption). Second, such exemptions are only temporary, so that, in a few years' time, the whole case would have to be argued again.

That is why, Booker tells us, on Tuesday, following the Commission's advice and with growing support from across the musical world, the IBO will visit the DTI to insist that there must no longer be any confusion about this matter: the directive is irrelevant to organ pipes.

Ultimately the only authority that could gainsay this is the European Court of Justice, the final arbiter on the meaning of EU law. And, with a good helping of irony, Booker concludes: "the possibility that the ECJ might interpret the directive in a way that would force the eventual removal of the organs from the cathedrals, churches and concert halls of Europe, and expose the EU to the ridicule of the entire civilised world, must be unthinkable."

Returning to our original point, though, despite the IBO specifically turning is back on the idea of an "exemption", what does the
Conservative website call for? Er… and exemption, claiming a "victory" because Alun Michael has agreed to consider this. Similarly, the MEPs Roger Helmer and Chris Heaton-Harris rushed into print on 22 March with a press release, headed "Hands of our organs", demanding that the DTI "ensure that the directive excludes organ pipes from its provisions entirely."

Perhaps, if we could exclude some of our MPs and MEPs entirely, we might be better off.