So, does it matter? 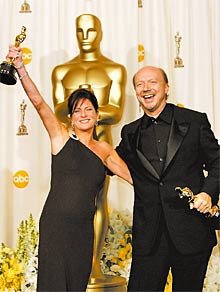 [Health warning: This posting will appear to be terminally frivolous to many of our readers and certainly to most of those who post on the forum. I can do nothing but suggest that they do not bother to read it but go on to weightier matters.]

There are two things that most of our readers know about me. Firstly, that I have no interest in toys. This posting will have no toys at all. Got that? No toys.

Secondly, that I am seriously frivolous in my interests, whether it be detective stories or new and old films. In fact, I find it quite hard to live up to the level of seriousness displayed by readers of the blog.

With that preamble, I can launch into the theme: the Oscars. (There, I warned you all.) I have not yet seen the pictures of the various outfits so cannot make any comments about that but I can, together with many other people, write about the awards themselves.

This has been the year of the least watched nominations, as anyone who has read Mark Steyn or various other commentators knows. The most popular of the winners is the documentary, “The March of the Penguins” and that only in the United States. The first Narnia film that was awarded various prizes also did well.

“Crash”, which won the Best Picture award, has already gone into DVD, a bad sign for a main-stream film, however low budget it might have been. The other nominated ones, “Brokeback Mountain”, “Munich”, “Good Night and Good Luck” and “Capote”, have grossed remarkably low.

That, in itself, would not be a problems. The Oscars do not have to go to particularly popular films. The problem is that these are not films from little-known arty film makers. They are all main-stream and have had quite the most astonishing amount of publicity. Yet the public has been staying away in droves.

(To be fair, very few films do all that well nowadays, proof that Hollywood has lost its ability to understand what the audience wants.)

A few years ago there was a genuine surprise at the Oscars when the Italian “La vita e bella” won the Best Picture award. It was genuinely off-beat in that a film that would normally have been nominated for the Best Foreign Language Picture award, was put in for the big one instead and won. As it happens, it was a genuinely moving film handling a difficult issue – the Holocaust in Italy – in an unusual, comical way.

Since then there have been few surprises, though much is being made of the fact that “Brokeback Mountain”, the favourite, did not win.

The other interesting and, even extraordinarily funny, aspect of this year’s nominations is how seriously they have been taken by the industry itself and attendant hacks. Solemnly, we have been told that this is the year in which Hollywood and the Oscars have grown up because so many of the nominations were important, meaningful and dedicated to a cause.

Curiously enough, the causes were all left-wing and the alleged courage of the film-makers non-existent. Just how brave is it to make an anti-McCarthy film? Or one about the supposed evil-doing of corporate pharmaceuticals?

Interestingly enough a more “courageous” or, at least, a more truthful approach to both those subjects would have made better and, possibly, more popular films. If Clooney, or someone else as Clooney is terminally incapable of thinking outside the BDS Hollywood box, were to make a film that looked at the McCarthy era and what went on before it in the light of all the information that has come out in the last decade or so, he might have had something interesting to say.

Why did all those privileged people become Soviet agents? How did the party manage to dupe so many seemingly intelligent individuals like Edward Murrow? Was Murrow a dupe or a liar? How was “McCarthyism” used to prevent any discussion of Communism and Communist infiltration for decades?

Similarly, Rachel Weisz and Ralph Fiennes might consider making a film in which the truth about medical drugs in Africa is told. That would involve a certain amount of research, of course, but the information is available to all who want to read it.

Mind you, the villains would not be big business but African governments who slap taxes on all those drugs that are sold to them at cost price or given free by the companies, thus preventing their use by the people who need them.

Other villains might be African officials who steal the drugs and sell them at highly inflated prices, again interrupting the flow to those who need them. Would Ms Weisz consider playing the heroine in something like that? Somehow, I doubt it. After all, that would mean abandoning all that she “knows” from everybody around her.

And what of the winner “Crash”? Have we not already had many films about the issue of race, some rather more courageous in peeking at the unfashionable red-neck attitudes? Only peeking, mind you.

Homosexuality? As Mark Steyn points out, the most courageous film on that subject was made in 1961. Joseph Losey’s “Accident” dealt with the issue when homosexual activity was still illegal in Britain. Dirk Bogarde took the role of the barrister in the closet at a time when he was one of the great pin-up heroes of young British womanhood. Now, that is courage.

So what do we have? A bunch of outdated and seriously unoriginal ideas put forward by people who take themselves and everything they say far too seriously and are of no interests to the public at large. Sounds like the Conservative Party. In fact, I can almost see George Clooney or Ralph Fiennes in the role of the Tory leader, who comes up with ideas that were buried years ago and people who have retired just as long ago.

There were some very delightful aspects to the whole circus, such as the fact that apart from Rachel Weisz getting an award for looking pretty in trying circumstances, the only British film to win anything was “Wallace and Gromit”. As it happens, I have seen it. (Well, how could I resist a film which was titled “The Curse of the Were-Rabbit”?) It is very good, indeed.

So what does any of it have to do with the European Union? Nothing at all. But it does have something to do with another theme that we pursue on this blog.

As politics and the MSM turns into mass entertainment (some of it extremely cruel), the entertainment industry has decided, unilaterally, to become the conscience of the world and its political intelligence. Sadly, nobody else, apart from dribbling journalists agree with that idea but that has not stopped George Clooney, Rachel Weisz, Ralph Fiennnes, Stephen Spielberg and others, too numerous to mention, from pronouncing endlessly on subjects they have no knowledge or understanding of and, to be quite frank, no interest in. Otherwise, even pea-brains though they are, they might have found out something new and interesting.

The subject of British films has been uppermost in my mind (incurably frivolous, I tell ya) because on Friday I went to the National Film Theatre to see that wonderful 1954 comedy “The Constant Husband” with Rex Harrison, Kay Kendall, Margaret Leighton, Cecil Parker and a host of other excellent British actors.

What is it that made it possible for the British to make good films for quite a long time? Why can they not do so any longer? As it happens, I did see “Mrs Henderson Presents”, a rather fatuous and plot-less film about the Windmill Theatre, for which Judi Dench was nominated for the Best Actress Award. She was very good, as was Bob Hoskins, but neither was what I would call an outstandingly stellar performance. And the film was dull.

(As for our other hopeful, Keira Knightley – forget it. I am not going anywhere near what is quite clearly a travesty of one of the greatest novels in English literature.)

In the end I come to the same conclusion. Films were made by people who saw their art or craft or trade as being part of entertainment. Not only they were more popular, they were actually better – better written, better directed, better produced, better acted. How many of the ultra serious, self-important Oscar winners and nominations will be watched in ten years’ time? A big round number, I should say. But “The Constant Husband”? No problem.

Oh well, I suppose the two films that, respectively, justified and glorified terrorism, “Munich” and “Paradise Now”, got nothing. One must be thankful for small mercies.