JSF – "no decisions have been taken" 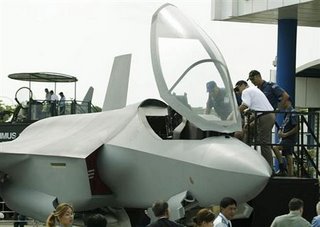 Despite the optimism expressed by the admirable Defense Industry Daily over the fate of the Joint Strike Fighter, yesterday's exchanges in both Houses of Parliament indicate that we are no further forward in resolving the issue.

In the Commons, Peter Bone tackled minister of state for defence, Adam Ingram, on the progress that had been made in discussions with the US, leading to an affirmation that the JSF would be bought. However, Ingram then admitted that "no final decisions have yet been made".

Liam Fox popped up ask whether failure on the technology transfer issue "could drive the UK into further European procurement that is not, in this instance, in the strategic interests of either the UK or the United States?", enquiring whether the minister understand the fears of the United States about the leakage of defence technology.

"Would he care to reflect on the damage done by today's news that 41 German companies are being investigated over sales of equipment and technology to Iran for potential use in its nuclear programme, and the impact that that will have on Capitol hill?" he asked.

Ingram retorted that it did not help "to point out that other nations are allegedly involved in things that they should not be doing, as such a claim has been the basis of press reports," but acknowledged that "there are some concerns within the US about this matter."

In the Lords, minutes later, Lord Astor of Hever was tackling Lord Drayson, who wanted to know whether the government "will now constitute a sufficiently funded integrated project team to reopen and take forward studies on a marine variant of the Eurofighter Typhoon aircraft."

All he got from Drayson was the assurance that "the necessary actions have been and will continue to be undertaken to ensure that we have the necessary contingency plans for the JSF project." Asked to deny reports that the MoD was considering the Rafale, all Drayson would say is, "I am happy to assure the House that the contingency plans that are needed to maintain our plan B are in place."

Asked also to give a guarantee "that there is no intention to share JSF technology with European countries?" as the US was "concerned that this could result in some technology leakage to the Chinese", Drayson stayed in assurance mode, telling the House that "we have all necessary safeguards in place to make sure that there is no leakage of information transferred to us as part of the JSF or any other programme."

That much is wishful thinking – at best. I do wish the Noble Lords and Liam Fox would read the Framework Agreement of 2000, which commits us to mutual recognition of the signatory states' security clearances. If we did take on the JSF and decided on a European weapons fit – like the Meteor or Storm Shadow – we would have French technicians crawling all over the JSF, their clearances approved by Paris.

Our parliamentarians need to wake up to the fact that, when it comes to defence secrets, we are bound in by Treaty to the other five nations of the Framework Agreement, to the extent that the "leakage" about which the US is concerned will be virtually impossible to prevent.

Nevertheless, if we take Ingrams at his word, no decisions have yet been taken on the JSF. That, in itself, is significant. A few months ago, the JSF was a done deal.