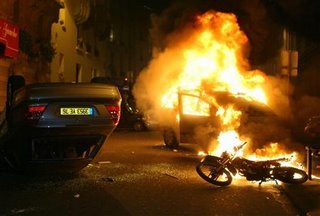 In what has become almost symbolic of France, we have again the sight of cars burning in the street – the infamous car-b-q – as hundreds of thousands of students, workers and left-wing politicians took to the streets. Organisers estimated the turnout nationwide at 1.3 to 1.4 million, with up to 400,000 of them in Paris.

And all because Chirac and de Villepin have attempted to bring in a tiny change to the labour laws, to allow employees to fire workers under 26 without explanation in their first two years on the job.

According to Reuters, the marches were mostly festive and peaceful, but dozens of youths pelted police with missiles, overturning and setting fire to a car at the end of the main protest in Paris. Police fired many rounds of tear gas to clear them from Nation square. Scattered violence was also reported in Marseille, Rennes and Lille, where police also charged and teargassed crowds.

But, as my colleague remarked the current situation is clearly unsustainable. But, if that number turns out for such a minor change, there is no hope of any more fundamental changes to the French labour laws.

This is a nation doomed.