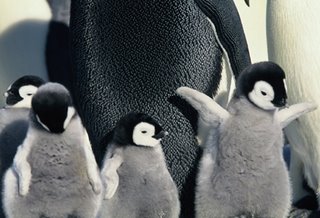 There is no end to European ambition. Even penguins are to be signed up as part of the great march forward towards integration and cultural domination.

Well, OK, not any old penguins but the stars of the French documentary “March of the Penguins”, highly successful in the United States, and winner of the Oscar for Best Documentary.

It seems that the film

(Question: what is a Gallic filmmaker? One of Asterix’s mates, Filmotronix?)

The money went towards marketing the film in other countries but, somehow, one does not feel that the assumption that any film that will receive EU funding will be successful, is in any way justified.

The irony of the situation is that “March of the Penguins” was not all that successful in France, possibly because of the less than intellectual, cutesy-pie, anthropomorphic dialogue imposed on it. When it first went to America with the dialogue it was disliked.

The American distributors substituted a voice-over and the film took off, though still not in Europe. Even in Britain it has had so-so reception. Perhaps, the Oscar will improve matters.

In the meantime, Commissar Vivianr Reding is making grandiose plans:

“European films succeed not only on their own national cinema markets, but also and increasingly in other European countries and other continents. At the same time ... European films still miss huge opportunities because of the fragmented audiovisual market in Europe and of the lack of a more proactive approach on new markets worldwide.”

Make up your mind, dear. Either they succeed or they need lots of EU dosh poured in. The truth is that they succeed if they are good, as “March of the Penguins” is, and do not most of the time, because they are not.