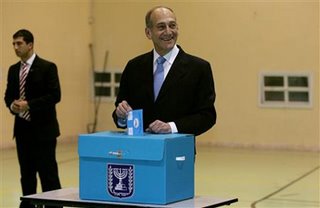 As the crucial Israeli election has drawn to a close, several things have emerged. One is that the turn-out was low, despite the fact that much is at stake. 57 per cent had voted at 2 hours before the polls closed, so one assumes that 60 per cent is unlikely to have been topped.

Some analysts suggest (as analysts do long before there is data to analyze – a capital mistake, as Sherlock Holmes would have put it) that this may favour the smaller parties at the expense of the big ones. Some of the former are religious ones, some more secular, including one list that concentrates on the plight of elderly people in the country. There are also at least two Arab parties.

Kadimah, the party formed by Ariel Sharon in order to break up what he saw as the Likud’s stranglehold on power, appears to be in the lead, but not quite as far as it had expected to be.

The Labour Party is a close second with Likud trailing behind those two. However, the Israeli electoral system is very complicated and most governments are coalitions. It is not until we have the final results tomorrow that there will be any indication of how matters might develop. We shall report at greater length then.