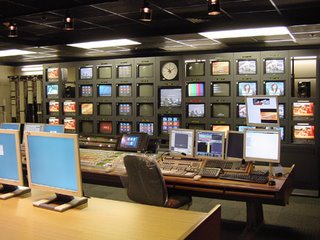 France’s rival to CNN and BBC World is scheduled to go on air in mid-December, aiming to broadcast initially to Africa, the Middle East and Europe. The idea, as we have mentioned a few times in the past, is to give a French interpretation of news, events and developments.

Problems have already arisen because of the lack of funding. Its annual budget, met by the French taxpayer, will be $88 million, about an eighth of CNN's.

Now one hears that there is another difficulty. The broadcasts will be aimed at “opinion formers, journalists and people who travel a lot”, as a spokesman for the new channel explained. And what is the language people like that use? Ahem, English.

Thus the new all-singing, all-dancing (well, almost) French international broadcasting channel will have a Francophile but Anglophone slant. In other words, it will broadcast mostly in English, some in Arabic and around three or four hours a day in French.

“Marc Favre d'Echallens of the Association for the Defense of the French Language expressed outrage that a station designed to give a "French vision" of world affairs would contain so little in French.

"After celebrating Trafalgar with the English and making light of our own great victory of Austerlitz, it probably follows that a publicly funded French television channel should end up broadcasting in English," he said.

"If all we get is a poor man's version of what is already available, what is the point of doing it at all?"”