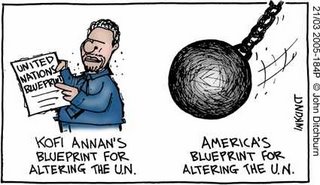 In one of the least surprising developments the UN has voted for a new Human Rights Council to replace the somewhat discredited Human Rights Commission (the one that had members like Sudan, China, Zimbabwe and Cuba and was, at one point, chaired by Libya). This is, according to all sorts of pundits like former President Jimmy Carter and alas still functioning Foreign Secretary Jack Straw is a GOOD THING.

Not, you understand, because this Council will actually be of any use, but because it is clearly an improvement on the Commission. Well, not clearly, perhaps but probably. Oh surely, it will be an improvement.

It will, for example, have fewer members, 47 instead of 53. You can see immediately what an improvement that is going to be. Also, it is going to meet three times a year for a total of ten weeks. The Commission used to meet once a year for six weeks. It seems churlish not to accept how much better the new regime is going to be.

And the members? Ah yes, the members. Well, that is a bit of a problem, there not really being enough UN members with what one might call a decent record in human rights.

In future these members will not be elected by their own regions but by the Assembly as a whole, though the original plan of a two-thirds majority to vote a country onto the Council was dropped in favour of a simple majority, that is 96 votes. Off-hand I can’t think of a single country except Israel and the United States that would not be able to muster those votes. And, of course, the regional representation will have to remain.

As the Wall Street Journal Europe pointed out in an editorial yesterday (subscription only):

“Worse, seats are distributed by a formula that guarantees Africa, Asia and the Middle East – the world’s least democratic areas – 26 Council seats, an absolute majority.

By contrast, the U.S. and the 27 other members of the so-called West European and Others Group [i.e. those that recognize human rights as a genuine issue] would have the right to no more than seven seats.”

Uplifting, isn’t it. No wonder Foreign Secretary Straw came out with a statement that was fatuous even by his standards:

“The U.N. must remain at the forefront in setting standards in the promotion and protection of human rights worldwide and examining progress in the implementation of these standards.”

When he says “remain” he must be thinking of Darfur, DR Congo, the Balkans and such notable events as the election of Sudan and Cuba onto the previous Commission.

Four countries voted against this idiotic proposal: the United States, Israel, the Marshall Islands and Palau. (No, I don’t know either. Sorry.) Three countries abstained, for reasons that are unclear: Iran, Belarus and Venezuela, all of whom had been seriously criticized for their human rights record though not always by the UN.

Other countries with a bad record, like China, Cuba and Zimbabwe, voted in favour, though China did say that when potential Council members’ records are examined

“decisions on human rights must be evaluated in the context of the history of individual countries”.

Quite so. You cannot expect China to stop torturing members of the Falun Gong or Cuba to stop imprisoning librarians for displaying copies of the UN Charter of Human Rights. It all depends on the historical context.

And what of Europe, the epitome, supposedly, of all that is free, democratic and full of human rights? Every single country, including Britain voted in favour, on the grounds that by doing so they were giving the Council the chance to improve.

We can all expect interesting developments on May 9 (Soviet Victory Day) when the first members are elected.

Can anyone seriously doubt that there is only one answer to the UN and all its shenanigans?