The website is theirs… and a lot more besides 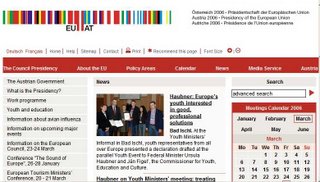 A feature of each six-monthly presidency of the EU is that the member state in the chair runs its own website. National pride is very much at stake, and the sites become showcases for the presidency efforts.

However, not all is well in the virtual presidency world as the Germans have been complaining about their language not being represented on the sites and the EU's ombudsman has agreed that their complaints have not been treated properly.

All this started in 2004 when an association for the defence of the German language wrote to the Dutch and the Luxembourg governments asking from German as well as English and French languages to be presented.

That was enough to get the German association really worked up, sufficient for them to take a complaint to the council. Initially, though, the Council had offered the equivalent of "nothing to do with me guv". The member state holding the presidency was solely responsible for its website, it said.

EU ombudsman, P. Nikiforos Diamandouros was then drafted in, and he disagreed. In his draft report issued yesterday, he decided that the presidency was functionally part of the Council, so the presidency's websites could not be considered as "national" websites outside the reach of Community law.

Perhaps of more significance though, this finding confirms that the EU presidency is not a national "perk" but a functional part of the council that must obey EU rules. When Tony Blair took on the job last year, therefore, he was not acting for Britain for those six months, but for the EU. The presidency was not ours, but theirs.