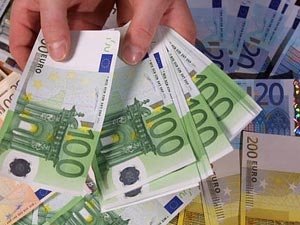 The Times business section has picked up on the tale of the new accession countries which want to join the euro. Slovenia is first in line with Lithuania and Estonia not far behind. All three would like to be fully signed by next year.

However, The Times notes a certain lack of enthusiasm for these "euro wannabes", not least because of the crisis surrounding the political dimensions of the European project. Eurozone politicians are presumably reluctant to court further popular discontent by ushering Eastern and Central European nations into the euro.

With the new EU countries also inclined to be more aggressively in favour of Anglo-Saxon-style economic reform, "Old Europe" may also fear that widening euro membership might lead to monetary union becoming more of a means to foster economic reform, and less an instrument for political ends.

Locked into the language now is the current definition of the downside of the euro, the paper referring to the "one-size-fits-none" — interest-rate regime. Critics who have complained of the current Eurozone not being an optimum currency area have been vindicated.

Far from converging, the euro, and the application of a single interest rate to its twelve members, has entrenched growth differentials between the zone's laggard core economies, led by Germany, and its fast-expanding peripheral ones, such as Spain and Portugal. The result has been the build-up of perilous economic imbalances and mounting political tensions that have led to speculation that monetary union might even collapse.

In Spain, which entered the euro as a relatively poor nation, it is not surprising that there has been rapid growth during a period of catch-up. But the inappropriately low Spanish real interest rates created by its relatively high inflation and the ECB’s low nominal rates have fostered a house-price bubble, as well as an explosion in the country’s current account deficit to levels as severe as those in the United States.

In Italy, meanwhile, the single interest rate has allowed the persistence of inflationary pressures from rapid increases in its wage costs that have greatly eroded its competitiveness and led to repeated, painful recessionary episodes.

The Times thus argues that the would-be new euro countries of Central and Eastern Europe would greatly compound the deep-seated difficulties already confronting monetary union. The national incomes of these states are a tiny fraction of those of existing euro members, implying even greater stresses from a catch-up process inside the euro than those experienced by the likes of Spain.

And, for the ECB's policymakers, a further expansion of the euro must risk making an already intensely difficult task all but impossible. For the twelve existing eurozone members, it can only amplify the forces that are already shaking the single currency's foundations.

Despite all this, The Times thinks that Slovenia will become the euro's thirteenth member state next year – but it suggests that going beyond that inauspicious number may prove not just unlucky for some, but unlucky for all.