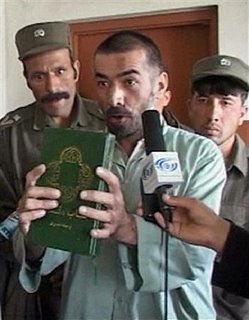 The EU and its various bodies, such as the Toy Parliament, are fond of expressing their views on all subjects around the world. Well, here is one for them: the fate of Abdul Rahman, an Afghan Christian, who is being tried for apostasy in Afghanistan and for whose blood (quite literally) the clerics are baying.

Equally stuck are President Bush and Secretary of State Rice, both of whom expressed shock and horror at the idea of a man being put to death for being a Christian and a hope that the Afghan courts would not behave that way. They and John Howard of Australia have said that people of all faiths have fought and died to make the country free, which should not abuse that freedom to restore injustice and moral slavery.

That’s fine and dandy but having given Afghanistan freedom the West cannot be seen to be interfering overtly in its judicial affairs. Should President Bush order the Afghani courts to release Abdul Rahman we shall hear a great deal about evil American imperialism from people who have remained strangely silent about the man who is on trial.

For instance, though Ruth Gledhill mentions that the Bishop of Rochester expressed what can only be described as mild indignation to her, I cannot recall the Archbishop of Canterbury, the man who thought that Guantánamo was the most relevant topic in Sudan and who voted for Church of England disinvestment from a firm that deals with Israel, saying a single word about the fate of a fellow Christian. (Then again, I do not recall him saying anything about the persecution of Palestinian Christians by Hamas and Fatah as well as other local groupings.)

What of the Christian Peace Campaigners, that organization so full of Christian feelings of gratitude towards the men who had risked their lives to rescue their moonbat members from rather unpleasant criminal gangs in Iraq? Abdul Rahman, who had wanted to live in peace and practise his religion? Nothing, rien, nada.

Above all, where is the European Union? Apart from the United States, three countries, according to CNSNews.com, Canada, Italy and Germany have voiced concern. (This does not allow for John Howard’s statement but, perhaps, there had been no official Australian reaction.)

And the EU? Has Javier Solana made any comments? Has the benighted European Parliament passed any resolutions? Not that I know of. The Italian Foreign Ministry, having chastised the Afghan ambassador is threatening to take the matter further:

“If this news is confirmed, Italy will move at the highest level, referring the issue to the E.U. in Brussels, to prevent a development that would be incompatible with the defense of human rights and fundamental freedoms.”

That should make those cleric shiver with fright.