The break-up of the Union 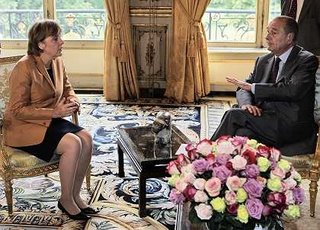 Undoubtedly, one of the reasons why the European Union is struggling is that the primary driver of European integration – the so-called Franco-German motor – is spluttering. Some would suggest that it is on the point of stalling.

This is pointed up by an article in The Business today, under the heading: "Why Paris and Berlin are drifting apart". Here, it is notable that the very title takes it for granted that the drift is a reality.

Says The Business, the old closeness, that steered western Europe from the aftermath of war is giving way to a more edgy relationship, politically and economically. The watershed was the French rejection of the EU constitution creating a divide which has since been reinforced by the French blocking a merger between its ailing Alstom group and Germany’s Siemens. This, is seems, caused much bad blood on the economic front.

Central to the current tepid relationships, though, is Chirac. With only a year of his presidency left to run, he is seen in Berlin as an ineffective lame duck and his government as badly hit by the current unrest over labour reform.

This will not be a surprise to our readers, and any student of the EU will readily understand that, from the very inception of the project, France has taken a dominant role in shaping Community politics. In so doing, it has capitalised on its "victim" status as the aggrieved party in the Second World War, relying on "war guilt" to keep Germany quiescent.

But no more. The Business observes that French attempts to dictate political affairs now go down badly across the Rhine. The enlargement of the EU has put Germany in the middle of Europe, its eyes fixed on Warsaw as well as Paris.

It must also be a factor that chancellor Angela Merkel is an Ossie and of a generation that is distanced from the War. She takes a wider view than Schröder, and could not be more remote from the Rhineland influences of his predecessor Helmut Kohl. Thus, she is seeking better ties with Washington and is less ready to play the anti-American card that her predecessor used to chase votes.

Furthermore, structural and economic differences are beginning to re-emerge as significant political issues. France and Germany differ over the creation of a single market for services, with the Germans aligning themselves with the EU, expressing increasing irritation over French protectionist moves.

The French, on the other hand, sensing their loss of influence over Germany and no longer being able to dictate the EU agenda with such ease, are beginning to withdraw from the "project", projecting an increasingly nationalistic stance on a wide variety of issues.

It was once thought – not least by this blog – that the emergence of the right-of-centre Merkel would by matched by the election in 2007 of the right-wing Nicolas Sarkozy, and re-invigorate the Franco-German motor, but The Business seems to feel otherwise. It suggests that a newly assertive Germany is here to stay and the current cooling of relations presages a fundamental shift in the balance of power.

Concludes The Business, France has not yet accepted that shift, noting that, until it does, the scene is set for increasing tension between the two main European players.

The question left hanging, though, is what happens when France does wake up to the reality of its diminished position. If history is any guide, a possible outcome might be a French retreat from the project, with a new president adopting Gaullist tactics, actively sabotaging Community initiatives.

This time round, though, Germany is unlikely to back down, leaving the possibility that France will end up seeking to form new alliances, effectively leading to a break-up of the European Union.

Whatever else, it is abundantly clear that the days of the European Union as it currently stands are numbered. Already, we have reached the limit of integration and the central question is how member states are going to adjust to the new reality.