I guess they don't read French 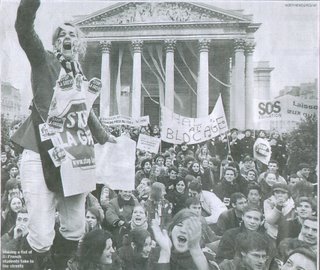 There is not much to say about the British strike. Slogans of “Hands Off Our Pensions” are not going to be read with any kind of sympathy by people who have in the last week received their horrendously inflated local tax bill and who know that “our” pensions are paid for by our taxes.

The French situation is, of course, much more interesting, what with students demonstrating for their right not to be employed or, at least, for their right to deny employment to other young people; unions going on strike; shoppers being attacked by students; and students being attacked by hoodlums from the banlieus. Actually, they might not be hoodlums, just people who have realized that the pampered denizens of the Sorbonne have taken upon themselves to decide their future.

And everybody is being attacked by the flics. All good fun.

I was intrigued by the article in the Business section. Ambrose Evans Pritchard outlines the various problems France is facing but comes to the rather surprising conclusion that

“In the long-run, France will out-perform, perhaps reclaiming its 18th-Century title as the Continent's hegemon, as it alone has avoided a collapse in birth rates.”

A very long run, I’d say and most French would agree with me. Birth rates are important but they are not the only thing and compared with an impossible economic and social situation with no sign whatsoever of the slightest attempt to change it, I’d say the fact that the the production of babies in France was at a marginally better rate than in Germany or Italy is less significant.

Then there was a picture headed: “Making a fist of it: French students take to the streets”. You will not find this picture on the website.

For in the printed newspaper the slogans in the picture are rather odd: “Stop la Grève”, “Halt au Blocage”, “SOS Education”. A quick check on the internet confirmed my suspicions: these were the slogans of the counter-demonstration, organized by Liberté-Chérie, which has had no coverage in the British media.

I know French is not an important language any more but does nobody in the Telegraph picture section read any of it? On the web they put up a Reuter’s picture of the correct demonstration.