Busy as a bee 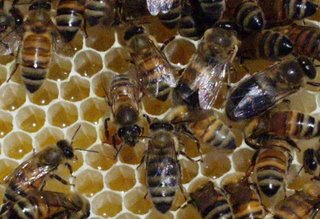 The Chinese "shoe war" is grumbling on but, as we predicted, the MSM – lacking the sexy headlines that "bra-wars" gave them - are treating the issue somewhat superficially.

What is interesting, though, is how little support there is for Peter Mandelson - a meeting of the EU's anti-dumping committee meeting on Thursday last, only three member states voted in favour of the commission plan, nine to ten voted against it while eleven abstained.

But, if the MSM can't get particularly interested in shoes, what price Chinese chamois-leathers, which yesterday fell victim to the latest round of EU protectionism, the commission slapping a hefty 62 percent tariff on imports from China.

Once again, the justification is "dumping", with the commission claiming that the Chinese had nearly tripled their European market share to 32 percent by selling below prices in China or less than the cost of production.

Somehow, I guess, this one is not going to dominate the headlines though. “Chamy wars” has a distinctly unsexy feel to it, and no one is going to write reams about our disadvantaged window cleaners and car washers.

No content with that, the comission is also planning a new round of tariffs on US goods, covering farm goods, steel, nuclear-power equipment and other goods worth $2.4 billion, after the WTO this week upheld a ruling that found the US had not complied fully with an order immediately to end its system of tax credits for its own exporters.

But the pièce de resistance of a busy week must surely be the ban – with effect from yesterday, of Brazilian honey. This is not an insignificant trade as, last year, Brazil exported 14.4 thousand tons of honey to the European Union, earning it a cool US$18.9 million.

The commission claims that Brazil needs to perform further quality control analysis on the product and that the country's processes need to be similar to those performed in Europe. However, the Brazilian Director of the Sanitary and Phytosanitary Issues of the Ministry of Agriculture, Livestock and Supply – there's glory for you – says Brazil already has its own control procedures, even if the EU does not recognise them.

Nevertheless, if it wants to continue exporting, Brazil now has to restructure its "National Programme of Residue Control" in order "to adapt to the EU export norms." It must demonstrate absence of elements that may affect its quality, for example antibiotics and heavy metals. The funny thing is, though, even the EU is admitting that it has never found any problems with Brazilian honey.

Perhaps reflecting a certain exasperation with the EU, the Brazilian Ministry of Agriculture now intends to look for new markets besides Europe.

Why should we worry? Who needs Brazilian honey, or Chinese shoes, or even their chamois leathers? Such deprivation is of nothing compared to warm glow we experience as we marvel at the productivity of the commission. We might even say it's been as busy as a (Brazilian) bee.