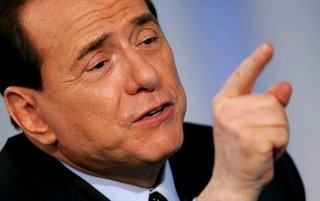 Today's the day, but not for teddy bears – unless you count Berlusconi. From the twenty-five corners of the vast Brussels empire, heads of state and governments are winging their way to the Capital, all under the gallant leadership of Herr Schuessel, chancellor of a country which once laid claim to a vast empire of its own.

Speaking of Berlusconi, Reuters tells us that the man has his own agenda – shock! Embroiled in an increasingly bitter general election battle with Romano Prodi, former presidente of the Brussels empire, he is hoping to use the occasion to revitalise his flagging prospects of regaining power.

Trailing in the opinion polls, Berlusconi, it seems, may well decide he has nothing to lose in Brussels and try to settle old scores, particularly with the French who have repeatedly crossed him. "I think it is almost certain that he will use the summit to launch an attack against French protectionism and reaffirm his liberal values," says Gianni Bonvicini, director of the Italian Institute of International Affairs. "He is clearly using every occasion available to him to send very strong messages to his electorate."

Meanwhile, according to that trusted and dispassionate source, The Guardian, Tony Blair's “intellectual guru”, the noble Lord Anthony Giddens - former director of the London School of Economics - has firmly put the boot into the whole sheebang, declaring that France, Germany and Italy are facing an economic crisis with worrying levels of unemployment, unless they reform.

This is supposed to be "a rare insight into the prime minister's private thoughts", although we are not told whether the rarity arises from the paucity of thought, or simply from the novelty of having them expressed.

This notwithstanding, Giddens runinates on whether there is "enough shock" in France and Germany and Italy to produce changes. "There manifestly is a kind of crisis in France, Germany and Italy," he says, to absolutely no one’s surprise.

Whether that sense of crisis will pervade the halls of the Justus Lipsus, however, is anyone's guess. Not least as Britain is playing the field, holding off from backing Berlusconi, on the basis that he might be out of office in a few weeks. Then, once again, Blair will be dealing with our Romano, this time ensconced as Italian prime minister.

Giddens is telling the Guardian that the Blairites regard Berlusconi as a failure. "Italy's got virtually zero growth rate," he says. It, as well as France and Germany should follow the example of Britain, the Netherlands and Scandinavian countries”.

Peter Mandelson, however, seems less than optimistic that this will happen. "Sometimes you listen to people and wonder if they just imagine that if they bring a comfort blanket over their heads far enough and firmly enough, all that is happening in the world will pass them by and they can re-emerge and carry on business as usual as if nothing has changed," he says.

And no, he was not talking about Tony Blair.