Don’t be nasty to Schröder 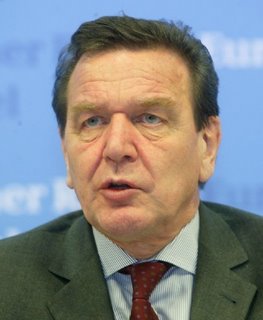 Former Chancellor Gerhard Schröder has once again resorted to the courts to protect his reputation (a lost cause in our opinion but it is his money).

Schröder’s lawyer, Michael Nesselhauf, has announced that he had won a temporary injunction against the leader of the Free Democrats, Guido Westerwelle, who is not allowed to repeat something he had said about the former Chancellor.

And what was this heinous comment that Gerhard Schröder simply cannot live with? What terrible crime was he accused of with no evidence whatsoever?

“gave a contract to a company as chancellor … and then took up a job with that same company just weeks after leaving office”.

Hmm. What is actually wrong with that statement? As the International Herald Tribune put it yesterday:

“Schröder in December accepted a position as the head of the supervisory
committee of the consortium building the North European Gas Pipeline linking Russia and Germany, less than one month after Angela Merkel succeeded him as chancellor.

The €4 billion pipeline agreement was signed just 10 days before the German general election in September, at a ceremony attended by Schröder and the Russian president, Vladimir Putin.

Gazprom controls 51 percent of the venture while E.ON, the leading German energy group, and BASF, the world's biggest chemicals maker, hold 24.5 percent each.”

Herr Westerwelle’s summary sounds accurate. The trouble is that

“[a] poll in the news magazine Der Spiegel this week showed that 62 percent of respondents believed that Schröder "should have shown more reserve" in his business activities after leaving office.

Don’t know what the man is worried about. He is still managing to fool thirty-one per cent of those asked.