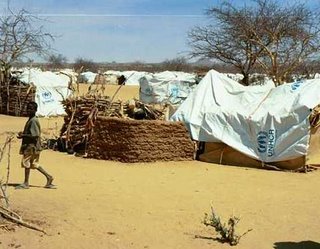 "With American forces heavily committed in Iraq and Afghanistan, European governments as always helpless to do anything without American leadership, and Khartoum assured of support from its Arab neighbors no matter how many Negroes it kills, recent Western efforts to expand the size and scope of peacekeeping efforts in Darfur have been, essentially, a transparent bluff. A halt to genocide there could happen only if the perpetrators of genocide saw fit to allow it.

Well, the bluff has been called. No one should be surprised by what happens next. Twelve years ago in Rwanda the governments of the civilized countries could say more or less plausibly that the explosion of genocidal violence in that country was well beyond anything they had expected. That can't possibly be the case where Darfur is concerned; Sudan's war against civilians has been going on since 2003, and Khartoum has now made it clear that it will continue. How will the United States and other Western nations respond?"

The one thing of which you can be sure - despite the bleating from the EU and its pretentions of being a "world power", it will do precisely nothing. So utterly devoid of any serious resolve is this construct that even in the Congo, all it can manage is an over-the-horizon force of 800 troops.