The Boy King speaks on Europe 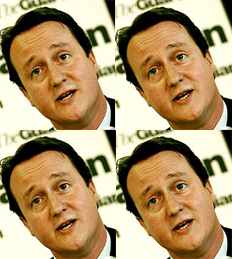 The Boy King says he would not attempt to pull Britain out of the European Union.

I think we all knew that but it is nice to have it confirmed, with him saying: "I want to be part of the European Union (but) I want that European Union to change, I think it's clear that it needs to change, just look at the referendum vote on the constitution."

This was yesterday, curiously unreported by the MSM and, even more curiously, omitted from the Conservative Party website, when the Boy King gave what might otherwise have been billed as a major speech, outlining his "European vision".

The omissions get all the more curious when one learns that the venue was the Foreign Press Association in London, a choice normally made in order maximise publicity, yet the only UPI and Reuters seem to have offered substantive reports.

Under the headline "UK's Cameron sets out European vision", UPI tells us that "a future Conservative government would set Britain on a path away from ever-closer union with Europe and reclaim powers back from Brussels". Cameron then supposedly set out his "vision of Europe" as little more than a free-trade zone. Most regional co-operation, he argued, should take place on an intergovernmental level rather than through the centralised mechanism of the Union.

Echoing a wearily familiar mantra, the report then cites the Boy King saying: "My party and I believe in an open-trading, flexible Europe, it's about cooperation, not about a superstate," adding, "It's not about becoming a country called Europe."

Evidently, he talked about stemming the tide of powers being transferred from London to Brussels, and said that a Conservative government would work to reclaim some powers, particularly control over social and employment legislation:

In an age where we need this dynamic economy - we've got to compete with India and China - it makes no sense to have our social and employment legislation determined centrally by Brussels. I think this is something which should be done at the national level.

Cameron also said he believed it had been a "damaging" mistake for Britain to relinquish its opt out on the European Social Chapter, for which it had clearly got "nothing in return." He would fight for the opt-out to be reinstated, he said. "That's not to say we're against employment protection but it's something that should be decided in Westminster with reference to our own traditions and culture," he added.

He said he was seeing "positive change" in Europe, with more leaders, for example German Chancellor Angela Merkel, coming around to a similar position on the sovereignty of nation states on such regulatory issues. Free trade, a single market and opening national markets to other member states were "hugely important in a globalised world."

Cameron also felt that there was also room for co-operation on crime, terrorism, the environment and where possible, foreign policy, but he wanted this done at an intergovernmental level rather than through "some treaty architecture."

Neither, it seems, would he try to bring back responsibility for trade to London. "Trade policy is decided in Europe,” he says, “and I don't propose to change that. But I want a Conservative government, the British government to be a force that argues for liberalisation and open markets."

What then leaps off the screen is his declaration that the role for the British government is "to argue in Brussels that we should be promoting free trade and open markets, and making the best of globalisation rather than believing it's going to be the end of us."

That would be an interesting election pitch: "vote for the best Party to argue our case in Brussels". I'm sure it would go down a wow on the stumps.

Anyhow, it may all come to naught. Apparently, Cameron also hinted that he believed the European project as it currently stands would ultimately fail, saying "there was life before the EU and there will be life after the EU." With that we would agree, and perhaps the Boy King is hoping it will fail before the voters notice that his avowed Euroscepticism is not even skin deep.