And the spin goes on… 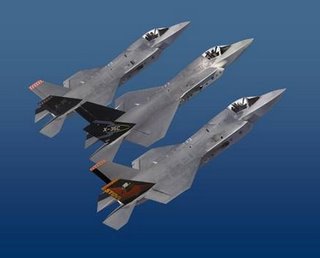 In what has become almost a traditional Sunday posting, we find ourselves again updating on the vexed Joint Strike Fighter project, which has made the pages of both the Observer and The Sunday Telegraph business sections today. Interestingly, both reports are very similar, undoubtedly reflecting MoD spin.

The Telegraph sets the tone with the headline, "Britain to fight for US jet technology" with Sylvia Pfeifer claiming that:

Lord Drayson, the defence procurement minister, will this week warn officials in Washington that Britain requires access to vital technology on the Joint Strike Fighter programme if it is to be able to fulfil its role as a leading partner in joint operations with the US.

Drayson, Pfeifer writes, is due to testify at a hearing of the Senate Armed Services Committee, when he is "expected to use the opportunity to press home how committed the UK is to maintaining its special relationship with America and how important the JSF is to Britain's armed forces."

The Observer's line is a variation on the theme, with a stronger headline, declaring: "MoD sets out ultimatum to US over joint strike fighter". Drayson, we are told, will tell the Committee that the UK must receive critical technical data about the F-35 joint strike fighter if it is to proceed with the project.

The Observer has it that the MoD is locked in a struggle with the Pentagon to secure an agreement on technology transfer that would allow UK contractors to carry out upgrades and servicing on the planes. This would mean the US revealing details of software used in the aircraft's design that it has hitherto refused to divulge. The MoD has submitted a list of requirements to the US Department of Defence and requires an answer before 6 December, when it aims to sign a memorandum of understanding to move from the development phase to the manufacturing phase of the project.

But the Observer tells us that Drayson has said the MoD is also developing a "Plan B" option that would involve prolonging the life of RAF Harriers, eventually replacing them with either Eurofighter Typhoons or French Rafale aircraft. Thus it is that the Rafale is now ledge as a serious option.

Anyhow, so much for the spin. The Washington-based UPI reporter tells it differently. His source is the beltway magazine Congress Daily which effectively confirms the story tun in The Business last week – that the Committee is holding an inquiry into the proposal to scrap the second engine. Technology transfer is not on the agenda.

Furthermore, representatives from eight countries will testify before the Senate Armed Services Committee, the hearing of which will be held on Tuesday. The main complaint is about the amount and quality of work the partner nation companies have received.

But, if Drayson does intend to make an issue of technology transfer, he could be in for a rough time. One thing that has lodged with Congress is Britain’s part in the EU's Galileo GPS project, and the fact that China has been invited on-board as a full development partner.

Almost as if it is intentionally seeking to undermine Drayson and the UK, the EU has now added a further twist to this tale, signing last Friday a co-operation agreement with Russia on space activites, Included in this is an agreement on Global Navigation, implementing joint development of user applications jointly with between the EU's Galileo and the Russian GLONASS systems.

Further co-operation includes joint work on "earth observation" (spy satellites) and satellite communications. Since the French are already closely co-operating with the Russians on several military aviation projects, through EADS, with which BAE Systems has close ties – this cannot help reassure Congress than any technology passed to the British will go no further. Drayson may yet get his excuse to abandon the JSF.