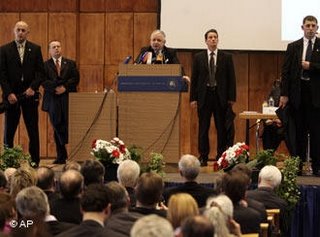 "An artificial creation." That is Polish president Lech Kaczynski's view of the European Union, an "artificial creation" which ploughs on aimlessly and has no solid budgetary foundations. It is, he added, a superstate which polarises countries' areas of competence but which at the same time is rather helpless because it only has a symbolic budget.

These remarks were addressed to the German daily Die Welt and conveyed by the English language Deutsche Welle which then went on to report Kaczynski's speech at Berlin's Humboldt University at the end of his two-day visit to Germany.

At the Humboldt, we are told, proceedings were disrupted by protestors described as "gay rights activists", expressing their disapproval at Kaczynski's "homophobic policies."

Nevertheless, he repeated his forthright views on the EU - albeit toned down somewhat – declaring that it was a myth to think that all Europeans had a shared outlook. "There is no European public opinion, rather national public opinions," he said.

As for the EU constitution, Kaczynski described it as "very open to interpretation", a comment amplified by the Polish news agency PAP, which reported the president criticising the constitution for not being a "collection of legal norms, but a collection of directives".

He was "against the EU Constitutional Treaty in its current shape," saying that the document included solutions which could turn Europe into a quasi-state, adding that "it is too early for such a solution." The EU should be heading for a strong union of national states. Poland is ready to participate in it, he declared.

By far the greater amount of coverage, however, has been devoted to the "gay rights" demonstration, but historians will note the special significance Kaczynski’s speech being delivered at Humboldt University. This, after all, was the same venue where, on 12 May 2000, then German foreign minister, Joschka Fischer delivered his famous "Thoughts on the finality of Europe" speech, calling for an EU constitution and for Europe to become a full federation.

It was that speech which set off the process which was to lead to the Laken declaration in the December of the following year, from which emerged the constitutional convention and the now failed treaty.

It is a measure of how far the dream has faded that when, six years after Fischer gave his ground-breaking speech, a senior EU politician in the same university hall should so easily dismiss what was, all those years ago, the pinnacle of aspiration – and a "gay activist" demonstration should get more headlines.