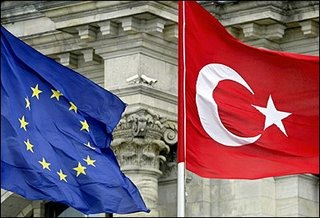 After the euphoria of late last year under the British presidency, we don’t here that much about Turkey’s accession talks these days. However, in the International Herald Tribune today, we have a comment from Sinan Ulgen, chairman of the Centre for Economics and Foreign Policy Studies in Istanbul, who has some interesting observations.

There is, says Ulgen, a dangerous frustration is creeping in and the mood in Turkey has begun to sour. The initial jubilance has been replaced with alarm, and even anger, as scepticism about admitting a relatively poor, Muslim country into the EU has spread across the continent.

Acknowledging the obvious, that admitting Turkey was never going to be easy, Ulgen goes on to say that European public opinion toward Turkey can best be described as lukewarm. But, he says, EU leaders should not deprive Turkey of the promise of full membership that it has aspired to for decades.

Nevertheless, he claims, this is what is happening. The terms for opening negotiations with Turkey were riddled with unprecedented conditions and, even if the talks were successful, there was to be restriction on the free movement of Turkish labour into the EU - breaching one of the hallmarks of the EU's vaunted single market.

There have also been mentioned "special arrangements for agriculture and regional aid" and the argument that Turkey should be granted a "privileged partnership" that falls short of membership has failed to subside.

What particularly concerns Ulgen, though, is the measure was taken by France in amended its constitution in April 2005 to allow for a national referendum on all future attempts by the EU to expand. This, he calls "draconian" and he now expects it to be replicated by other member states, allowing European publics to directly vet future countries that want to join the EU.

And, as if that was not bad enough, Austria, has been pressing to insert tough political conditions on criteria Turkey must satisfy in fields that are normally not heavily scrutinised for membership, such as education and culture.

The last straw is the EU’s failure to deliver on its promise to alleviate the economic isolation of the Turkish Cypriots after they voted "yes" in a referendum on reunifying the divided island in April 2004, yet the EU is now insisting that Turkey lift its embargo on Greek Cypriot ships.

This sequence of events, Ulmet feels, is already denting domestic support for the EU in Turkey, with a growing swathe of Turkish public opinion questioning whether Turkey should become a full member.

According to a recent poll by TNS-PIAR, support for EU membership in Turkey has dropped 13 percent, from 72 to 58 percent, since last year - an all- time low and a significant decline in a country where the EU has been unquestioningly embraced by the political establishment for decades. Ulmert continues:

The risk is that an anti-EU backlash in Turkey could halt vital political reforms such as better rights for women and minorities that have been driven by the carrot of EU membership. The EU was able to exert maximum influence and bolster domestic reforms in Turkey by offering an impressive menu of benefits crowned by the ultimate reward of full accession. But recent developments are undermining the credibility of this reward.

Even if accession is officially on the table, Turks increasingly perceive the deterioration in the likelihood of achieving it. No credible political leader can realistically be expected to espouse a seemingly losing cause. As a result, a serious national reappraisal of seeking full membership cannot be ruled out.

Should that happen, political volatility in a larger region already beset by major instabilites would increase. It would then be up to historians to try to understand the causes which led the normally slow moving EU pendulum to swing from one end to the other in a matter of months.

For our part, we have said that, to get a true measure of which way the wind is blowing, watch the real power in the land – the military. And, from initial enthusiasm, reflected in signals that major procurement decisions could be directed towards European companies, Turkey is hedging its bets, widening out its purchasing spread and investing in domestic production.

Now, it seems, the population at large is beginning to fall out love with the idea of joining the EU – with who knows what consequence. For the EU, however, which boasts of enlargement as being its most successful foreign policy, it looks like another failure is on the cards.