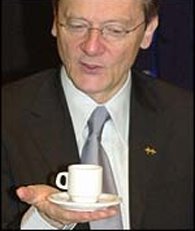 Culminating as it did in a huge climbdown over the EU budget, few will forget Britain's last term in the EU presidency. But, just short of mid-term, the Austrian presidency seems to have disappeared without trace.

That perception shines through in an interview published yesterday on the website of the German news magazine Der Spiegel, where Austrian chancellor Wolfgang Schuessel seeks to defend his country's record. In the interview, Schuessel is challenged over his ambition "to give new momentum to the EU". These were big words, he is told: "where are the actions?"

Apart from crisis management, however, all Schuessel seems to be able to offer is "the discussion about the identity of the citizen of Europe with the 'Sound of Europe' event...", which Der Spiegel airily dismisses. "No doubt 99 percent of EU citizens have never heard of it," says the interviewer.

But it enables us to "track the discontent", says Scheussel, "what do the citizens not like about Europe, about the institutions?" He adds:

If you do not see that as momentum, I cannot help that. The fact that we do not immediately have the right answers to every individual question is, in my opinion, even a positive sign. We must reflect a little before we can give the right answers. Where should the journey take us? Who is assuming responsibility?

Schuessel then burbles on about projecting the "European Way of Life" more self-confidently to the outside world, to which Der Spiegel responds, "This idea does not seem to have had much success… for the majority of the citizens, Europe is very far away."

The answer is predictable: "We need more Europe… foreign policy, the coordination of a European energy strategy… we need less small-mindedness… the regions must be strengthened… the nation-state is often too small for the big problems and too big for the small, everyday concerns." Despite all that, he goes on, "the successes are absolutely there: If we look back to 15 years ago, the reality of European unity has surpassed even the boldest fantasies of that time."

On how to deal with the constitution, Der Spiegel suggests it "has missed the mark" and "discussion is at an impasse". "There will be something new," responds Schuessel. "We must look into the unease that caused the constitution to fail in two referendums… At the summit in June, we will offer some proposals of our own in this regard."

He would not, however, be drawn on this. "You cannot expect me simply to pull out the answer like a packet of Nescafe - according to the slogan: Here is the instant solution," he declares.

Interestingly, Nescafe is running a "makeover" competition at the moment, offering a £10,000 prize so that the winner can "wake up to a new you". Perhaps the answer is on a Nescafe packet after all.