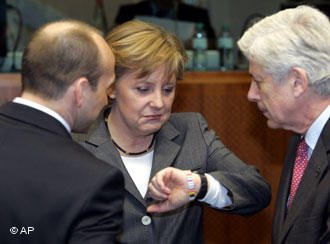 "EU agrees common energy policy" trumpets The Times. That is supposedly one of the outcomes of the European Council which drew to a conclusion yesterday

Thus, the Times reports the EU has agreed to devise a shared energy policy for the first time, better to withstand a future of rising oil prices, climate change and strong-arm tactics by Russia and the oil producers of the Middle East.

However, the detail is somewhat thin. The strategy involves EU talks with Russia aimed at avoiding a repeat of Russia's dispute in January over its gas supplies to Ukraine and a "biomass action plan", aimed at increasing the use of natural fuels in buses and cars. Also, when future energy crises loom, the policy calls for the EU to respond "in a spirit of solidarity".

The game is given away though by the German news agency ddp (no link) which reports that German chancellor Angela Merkel rejected the demand by Barroso for the right to have a greater say in energy policy, refusing to allow the commission more powers.

In order better to co-ordinate and ensure energy supply, Javier Solana was asked by EU leaders to prepare and hold talks with the supplying countries outside the EU, but key issues like nuclear power were not broached. Merkel, it seems, simply insisted that the national states themselves must decide on the energy mix.

From this, very little seems to have been agreed, beyond vague expressions of intended "solidarity", and a few administrative programmes which were on the stocks anyway.

Looking at the Council communiqué, that impression is very much reinforced. There is very little beyond the fine words which simply mask the fact that this is a policy without substance.