A certain lack of credibility 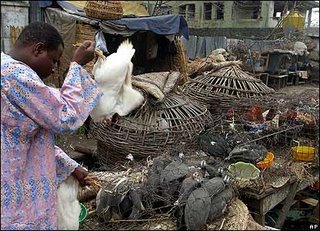 The news agency Deutsche Presse-Agentur has come up an intriguing story, headlined: "EU slammed for not releasing funds to fight bird flu".

The substance is that, for all its pretensions of being a global power, the EU is under attack for failing to release any of the money it promised to help in the global fight against bird 'flu.

The complaint comes from the head of the World Organization for Animal Health (OIE), Bernard Vallat, who was having a general moan about donors not putting their money where their mouths are. Some $1.9 billion had been pledged at the International Pledging Conference on Avian and Human Pandemic Influenza held in the Beijing on 17-18, but the organisation had so far received only $16 million.

Of the defaulters, Vallat singled out the EU as "the worst case". Having made its promises, it had "not even decided how to allocate the amount", he said.

Vallat was responding to questions by a French parliamentary commission on bird 'flu. This had recently returned from Senegal and Mali and was demanding to know why these two countries had not received any aid to fight the H5N1 virus.

Afterwards, it was the head of the commission, Jean-Marie Le Guen, we delivered the killer line. In a press conference, he told journalists that the matter involved "a very serious governmental error by Europe," which was risking its "political credibility".

We are somewhat surprised that anyone believes that the EU still has any "political credibility", but there you go.