The perils of spin 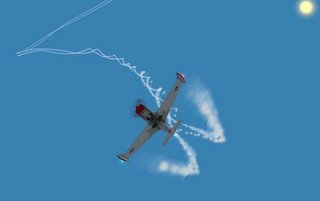 You go in at about 180 knots, ease the stick back, pulling about 2G. As the nose lifts above the horizon, you close the throttle and let the speed wash off. The controls slacken and you pull the stick right back into your stomach. It goes quiet… 90 knots and you're looking at the sky… 85 knots and you feel the pre-stall buffeting. Quickly, you boot full left rudder.

In a flash, you're no longer looking at the sky. The aircraft is plummeting, gyrating wildly. The rudder bar kicks against your feet and the stick lashes out at you like a wild animal. You centralise the controls, locking your feet on the rudder bar and gripping the stick… it takes both hands and all your strength.

Count the turns… the sun is your marker. Flash! One. Flash! Two… confirm the direction of turn. Flash! Three. Apply full opposite rudder. The turn stops and you centralise, ease forward on the stick and bleed on the throttle. As the speed builds up, you ease the stick back and pull through, back to level flight.

Then you lift your visor to wipe the sweat from your eyes and grip the stick again, easing cramped muscles, hoping your instructor does not notice you are shaking - part exhilaration, part terror. You have just recovered from your first spin.

In a modern training aircraft, spin recovery is relatively routine, but even then you are gravely warned that if you have not pulled out by five turns, you don’t mess about – you eject. In the first aircraft, the spin was irrecoverable and almost invariably fatal. Even in some modern aircraft, it is still so. 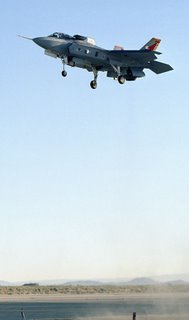 But its is spin of a different kind that seems set to do for the Joint Strike Fighter. Booker today, as we mentioned in the post before this, picks up on the current situation, as we see it, summarising our most recent reports here and here.

But today, also, The Business picks up the story, reporting that there is to be a "US Senate inquiry into F-35 contract". More precisely, this is to be an inquiry into the Pentagon proposal to cancel the second engine for the JSF - in which Rolls Royce has a 40 percent stake. This is entirely expected and predictable - as part of the normal political process of vetting the US defence budget. To this, we have referred several times, not least here, here and here.

But, to this innocuous and expected development, which was reported in more detail by Market Watch on 2 March, The Business adds that the moves "comes amid frustration in the Ministry of Defence that the Pentagon is becoming increasingly protective about the project – and that it may not be viable if Britain cannot have access to software codes used for the aircraft." 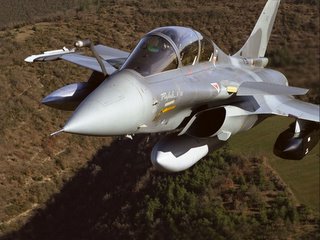 This is definitely part of the "spin" that we consider is part of a concerted move by the government to prepare the ground for abandoning the JSF project in favour of purchasing the French-built Rafale, as part of a side-deal linked with the building of the Royal Navy’s new carriers.

Unfortunately, the Conservatives are not fully on-side on this, and The Business reiterates the line taken earlier by procurement shadow Gerald Howarth, this time in the mouth of shadow defence secretary Liam Fox, who says the deal threatens to split the transatlantic alliance by pushing Britain towards European defence alliances. "There are a lot of people wanting to pull Britain out of the JSF," Fox is cited as saying. “We have expressed our concerns that the JSF contracts have strategic, not just financial implications.”

The Business story concludes that it understands the MoD has little hope of resurrecting the Rolls-Royce deal, a level of pessimism that is not shared by some US commentators – indicative perhaps of yet more spin.

Behind all this is building a low-level propaganda campaign that is seeking to project the UK is somehow being badly treated by the US over the JSF project but, as a recent report in TMC Net indicates, this is far from the case. Apart from the involvement of Rolls Royce,

BAE Systems facilities in both the US and UK are responsible for the design and delivery of key areas of the vehicle and weapon systems, in particular the fuel system, crew escape, life support system and Prognostics Health Management integration. The company also has significant work share in Autonomic Logistics, primarily on the support system side, and is involved in the Integrated Test Force, including the systems flight test and mission systems.

The report goes on to say that the system development and demonstration phase is estimated to be worth more than $3 billion to the company and production contracts could total $21 billion. These figures do not include export sales, support or other opportunities such as upgrade programs.

In all, the F-35 project has a major British component, much of which could well be at risk if the government does pull out. And if that happens, it will be because, as Booker writes, Britain's defences and military procurement have now been locked into the European integration process.

He concludes that the most remarkable feature of this astonishing shift in Britain’s defence policy is that our government has been able to drive it forward without ever admitting what it is up to - and virtually without anyone noticing. Whatever else we write, that much is true. Much of what we do deduce is, inevitably, informed speculation. But at least we are following the developments, while the MSM has abandoned its duty in this respect and is letting a major issue go unremarked.