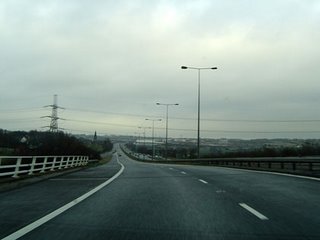 Heading towards Manchester the other day, as always I used the M606 to bring me to the trans-pennine M62. Just before you join, there is a speed camera enforcing an entirely irrelevant and unnecessary 50 mph limit. So unexpected is it that it is very easy to be caught.

Having been trapped by this accursed machine myself, on approaching the camera I usually slow right down to the requisite 50 mph and sit in the outside lane of the two-carriageway motorway until I am past it, thus dissuading the unaware from steaming past and adding to the coffers of the local camera partnership.

Generally, this works as anyone at least half-alert seeing a 3.5 litre 5-series BMW tooling along at 50 mph on the outside lane of a motorway tends to smell a rat and slows down.

This time, however, it did not. A Volkswagen Passat came storming past me on the inside, at a rate of knots, completely ignoring the camera. Before he disappeared over the horizon – emulating an EU "intervention" force – I managed to note the number plate. It was Polish. Effectively immune for the law, the car driver must have known that little things like speed cameras need not bother him.

It is with somewhat mixed feelings, therefore, that one reads today that the EU transport council has approved a single model driving license for all twenty-five member states, replacing the 110 models in force throughout the Community.

The license itself, however, will be only the visible sign of a much wider harmonisation programme, which also encompasses standard license conditions and a requirement that each member state maintain a central, electronic database of license holders.

Ostensibly, these moves make sense. Although I have enjoyed the freedom of being able to drive with impunity on French roads, taking their 130 limit at face value – I never did understand these killermeter thingies, so miles per hour was quite good enough – it cannot be right that freedom to travel on other countries' roads also brings with it impunity from their traffic laws.

Of course, there is always the option of the on-the-spot fine, but the greater deterrent are the penalty points. Currently there is no means by which one jurisdiction can impose these on a non-national. Nor would it be fair, for instance, to have that situation, if it ended up in a driver being banned in his own country for offences which would not have led to that outcome had he been tried in his own courts.

We have, therefore, a situation which, on the face of it, provides a justification for "common action", which is precisely the rationale on which the EU relies.

Interestingly, exactly the same issue is being confronted in the United States. Currently, driving licenses are issued by state authorities but there are moves to standardise the design and maintain a central database. There, as well as here, there are concerns that the license will become the de facto national ID card.

Thus we have a conundrum. Do convinced Eurosceptics reject the idea of a "Euro-license" because it is also a means of furthering European political integration, or do we accept the idea at face value and go along with it?

Alternatively, we could argue that the measure could have been achieved by a separate treaty or convention, without the European Union – which seems the best answer. We can accept common European initiatives, but do not need political integration to make them happen.