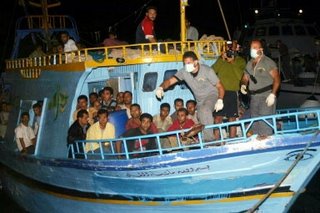 From Reuters, via DefenseNews (no link), we learn that, yet again, EU justice commissioner Franco Frattini is calling for an EU coastguard service in the Mediterranean, "to fight human trafficking and rising numbers of illegal migrants".

"My idea is that Europe should have a zero tolerance on trafficking, the idea is that of a European coast guard," Frattini told reporters during a visit to Athens. "One step, and it is a possible step so far, is to have joint training for national coast guards. They will then participate jointly in operations."

A joint coast guard could also include expert teams such as interpreters and medics who could be dispatched in case of a major emergency, Frattini said. "It will improve the capacities of rapid reaction of joint expert teams if there is an emergency," he said.

At first sight, this looks like yet another march towards integration, but things are never as simple as they seem. As we pointed out earlier, Italy is spending €115 million a year on fighting illegal immigration which, in view of Italy's yawning budget deficit, is unsustainable.

Frattini, therefore, wants EU money to pay for the policing of Italy's maritime borders and he thinks that the way to get this is to encourage the formation of an EU coastguard service – the Community in the service of national interest.

Judging from the frequent calls from Frattini on this issue, and the lack of any real action so far, one suspects that there is no great enthusiasm in Brussels for the venture.

Possibly, the commission is reluctant to take the responsibility for something that requires huge resources and can only bring it public relations grief, with blame for dead bodies of immigrants being washed up on the shore of Europe being laid at the door of Brussels rather than directed at the local governments.

Such an idea is an anathema to a commission which has long sought power without responsibility. Taking this to its most basic level, it is quite happy to dictate increasingly detailed laws on how we deal with our waste, but the last thing in the world it wants is to be responsible for collecting the dustbins.

In mass immigration, however, theory is meeting practice and coming down to earth with a bump. Unable to cope with its problems, Italy (and, indeed Malta) is calling for EU action. And when it calls, "Europe" isn't there.