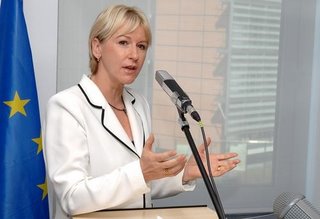 Following on from our report on the great organ saga, Douglas Levey of the Institute of British Organ Building (IBO) met officials of the Department of Trade and Industry yesterday, in an attempt to clarify the position regarding the application of EU directives.

The British officials, however, were adamant that, as they now stand, directives 2002/96/EC (Waste electronic and electrical equipment) and 2002/95 on the Restriction of the Use of Certain Hazardous Substances in Electrical and Electronic Equipment (RoHS) do apply to these musical instruments, the latter depending on the former for its application. Their view is that, as long as their pipes are made from lead – and there is no alternative material - from July, it will become illegal to manufacture organs in the EU.

However, unknown to us at the time, the fragrant Margot had been on her feet in the EU parliament in Brussels on Wednesday 22 March, speaking during the annual policy strategy debate. While on her feet, she told MEPs:

I am very happy to have the opportunity to tell all the people in the UK that church organ pipes are not covered by the directive on electronic and electrical waste. You can fill all your churches with as many leaded pipes as you want. The Commission will not interfere with that. Just make sure that now and then the poor people in the UK hear the truth, as they rarely receive correct information. You can rest absolutely assured that the directive does not cover church organ pipes.

There we have it, from the horse’s mouth, on which basis, the problem would appear to be sorted. Once again, we seem to have the British establishment at odds with the commission on the application of EU legislation.

In passing, has also to remark on the intervention of East Midlands Conservative MEPs Roger Helmer and Chris Heaton-Harris who, even as the fragrant one was speaking, were issuing a press release, in which they declared that they had "reacted with anger to news that new EU legislation could threaten the future of traditional pipe organs in the region's churches."

Had, of course, they actually been in the chamber to listen to Margot, the tenor of their release could just have been a tad different.