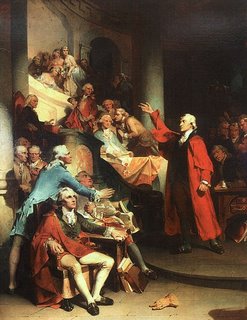 Many things happened on March 23 over the centuries but two of them seem of particular note:

In 1775 Patrick Henry made his famous speech to the Virginia Provincial Convention calling on it to join the movement for independence from British rule. It can be argued that the American War of Independence was the second Civil War as Briton fought Briton for various principles in North America.

Patrick Henry was successful. The Virginia Provincial Convention voted for his proposal and one sentence from his speech has gone into every dictionary of quotations:

“Give me liberty, or give me death!”

Fast-forwarding to the twentieth century, on March 23 in 1983 President Reagan first proposed developing technology to intercept enemy missiles --- a proposal that came to be known as the Strategic Defense Initiative, as well as "Star Wars".

Instead of death, that brought liberty to millions of people who had been living under Communism.