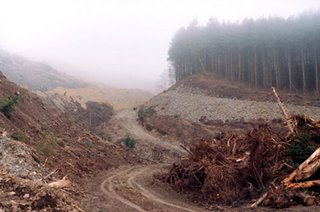 If you want to see the effect of the EU's other obsession – its love affair with "renewable energy" in the form of wind factories - have a look at this website.

The picture shown here is one of a sequence of hundred, illustrating the environmental degradation to an upland site in central Wales called Cefn Croes, all done with the approval of bodies such as the Forestry Commission (which is not only an active partner in the enterprise, but also a major financial beneficiary), the Countryside Council for Wales, the Environment Agency and the Royal Society for the Protection of Birds.

This is to achieve an annual saving, as an optimistic estimate, of 115,000 tons of CO2 emissions, compared with the 520,000 tons annual CO2 emissions from a typical jumbo jet.

But then, with an annual income of £16,000,000 from the 39 turbines on the site – much of it drawn from the £485 million annual subsidy bonanza – no wonder are its foreign owners, Falck Renewables - an Italian company based in Milan – and General Electric Wind Energy, so anxious to get in on the act.

But aren't we so lucky that the EU - with the active co-operation of our own government - takes such a keen interest in the protection of the environment?