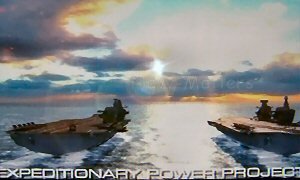 With the news last month that the UK is to proceed to the preliminary design stage of the new aircraft carriers, it now looks as if we are going to enter a co-operative agreement with France on the project.

Not, of course, that we get such an important detail from our own government. This little titbit comes from across the Channel, with the French government announcing that it hopes to sign an intergovernmental agreement with Britain early in 2006. This will be an agreement to exchange information about carrier programmes, aimed at saving money on the French ship, known as the "Porte-Avions 2 (PA2)" vessel.

The objective, according to a French official, a memorandum of understanding which will allow the French state and industry to study Britain's detailed design work on its large carrier program.

No confirmation of this has come from the UK, with a British MoD spokesman saying he "was not in a position to comment" on the "possible signing".

Nevertheless, Louis Cazaubon, chief executive of MOPA2, the DCN-Thales joint venture in charge of the PA2 program, said that the French government had opted for a common detailed design and procurement with CVF, adding that an earlier French industry feasibility study had showed 80 percent to 85 percent commonality with the British vessel.

Apart from the reticence of the British government to confirm this arrangement, there is something not quite right here. Amongst the claims made by the French is that the propulsion system could be a major source of savings if three power systems are ordered instead of two and one, as a warship’s power system has a higher proportion of cost than a civil vessel.

However, the French intend to operate catapult-launched Rafale aircraft while the current plan is for the British to operate the short take-off and vertical landing Joint Strike Fighter. The former will need steam-driven catapults, requiring at the very least an auxiliary steam generator, provision for arrester gear and different deck layouts.

Given also that the combat management systems and weapon systems are expected to be national options, it is then very, very hard to accept that the French and British ships could have anything like 80-85 percent commonality claimed by Cazaubon.

The only way the commonality could reach that level seems to be by the British government ditching the Joint Strike fighter and buy Rafales. On this, the specialist website Navy Matters suggests that, excluding flight deck and combat systems "where there are significantly different national requirements", only 75 to 80 percent of these two programmes could be common. Overall commonality, therefore is likely to be significantly lower, which seems to allow for the different aircraft.

A much more detailed analysis can be found on the Navy Matters site, which makes it clear that the issue is far from resolved. We, as always, will be keeping an eye on it.