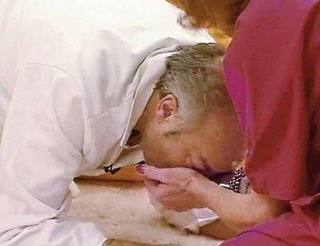 One of the stories definitely not reported by the American media while I was there, is George Galloway’s strange behaviour in the Big Brother house. Some Americans who follow British news closely knew about it but I heard from Charlie Wolf, when we were discussing our regular broadcast.

Having more or less re-immersed myself into British political life (since yesterday morning) I still remain mystified why it is that a man who has given vociferous support to all the worst dictators and mass murderers in the world; who has clearly taken money from at least one of them – money that was meant for the people of the country about whom he has shed crocodile tears; who has disposed of money he raised supposedly for charitable purposes in ways that have not been accounted for; who conducted a particularly nasty election campaign with vicious personal attacks in Bethnal Green, has been forgiven for all of that. But as soon as he makes a complete fool of himself on TV he is lambasted on all sides. Up with this the Guardian will not put.

It is, of course, true that Galloway is an elected member of parliament and as such should be serving his constituencies and … I was going to say his country but realized in time what a funny idea that is.

Today’s Evening Standard reports, for instance, that troubles are looming for the Royal London Hospital in Whitechapel. As the local MP for the area, Galloway ought to be involved. Except that he can’t be as he is incommunicado in the Big Brother House. But is he?

Today’s House of Commons Order Paper apparently boasts of no fewer than 12 Early Day Motions graced with George Galloway’s signature. This is most peculiar. He could not have signed those EDMs and he could not have authorized anyone else to sign them. Besides as Speaker Martin said, it is hard to imagine whom he could have authorized.

It seems that one of the EDMs congratulates Harold Pinter on the Nobel Prize for Literature; another one expresses shock and horror at the “obscene level” of city bonuses (though not, presumably, at the obscene level of payments to participants of truly abysmal TV shows). There is also an EDM on post-Christmas abandoned animals – something, I understand, Mr Galloway should know about, especially if we are talking about cats.

After a couple of points of order from Labour MPs Speaker Martin has promised to look into that matter of George Galloway’s apparent ability to bilocate. He also admitted to watching the man’s unseemly behaviour on Celebrity Big Brother.