Could you make it up? 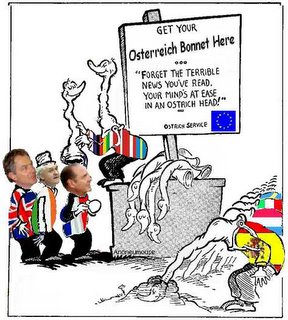 A good contender for one of the most overworked clichés of modern times has to be "you couldn't make it up". But could you make this up?

With the world going to hell in a handcart, according to Euractiv, EU leaders are saying: "Services Directive the most important issue in 2006".

To be fair (although I promise I won't make a habit of it), the story goes on to say that, "Leading figures from the Austrian presidency, the commission and the parliament agree that the Services Directive will be one of the most important issues of the new year." This is based on an account of the first working meeting between the three institutions, on 9 January.

El Presidente Barroso says that, after two years of discussions on the matter, the commission was now going to prioritise the Services Directive. More precisely, he is going to come forward with a new proposal in due time before the Spring Council, on 23-24 March, making it possible to reach an agreement on the directive before the end of the Austrian Presidency, on 30 June.

The EU parliament is to debate the directive on 14 February, with the vote scheduled for the next day. Trade Unions and NGOs are preparing two large-scale demonstrations in Strasbourg to coincide with these dates. Could be fun.