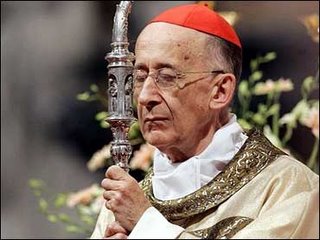 Things are coming to a pretty pass when the Roman Catholic Church starts attacking a European Union institution, but that is precisely what is happening.

According to the Catholic newspaper, The Universe, Italy's highest-ranking Catholic has taken the EU parliament to task over a resolution on married and same-sex couples.

This is the resolution sponsored by Michael Cashman, the British Labour MEP. Its critic is Cardinal Camillo Ruini, the Pope's Vicar for Rome. Yesterday, he denounced it as "profoundly wrong and full of negative consequences". The Cardinal described the parliament's actions as "part of moral pressure aimed at weakening the very cornerstones of our civilisation".

He also said the Church could not accept "equating the rights of homosexual couples with those of true and legitimate families," emphasising what he called "the growing importance that specific anthropological and ethical problems are assuming, even in the political and legislative realm."

Not one for brevity or the catchy soundbite, Ruini also referred to the "widespread tendency in many countries and also presently in Italy, as different signs show, to introduce norms that, while they do not respond to actual social needs, would compromise the value and functions of the legitimate family, founded on marriage, and the respect due to human life from conception to its natural end."

I would not exactly call this a "backlash", but it is the first time to my recollection that a high official of the Catholic Church has made such an outspoken attack on an EU institution. Even in our increasingly secular society, that must stand for something.