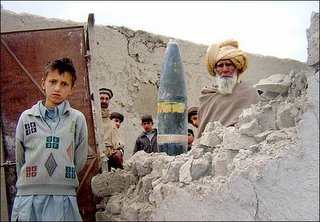 And if you believe that, you will believe anything. But in this instance, it is the caption that conveys the "lie".

It was picked up by one of our alert readers and is now all over the blogosphere (see here, for instance, and here).

In the original copy, the caption, printed under a photograph (above - double-click to enlarge) published by the New York Times reads: "Pakistani men with the remains of a missile fired at a house in the Bajur tribal zone near the Afghan border."

The photograph accompanied the story on the "deadly American airstrike" on a village in the northwestern tribal region last week, aimed at killing Ayman al-Zawahiri, and purports to be a picture of the post-strike scene. Only now has the NYT made a correction, after the blogs had run riot, and appended: "A picture caption on Saturday with an article about a US airstrike on a village in Pakistan misidentified an unexploded ordinance (sic). It was not the remains of a missile fired at a house."

The "unidentified ordnance" is certainly an artillery shell, probably 155mm, and from what remains of the markings, looks to be a Nato-type high explosive round. From the striations on the rotating band near the base of the round, it has almost certainly been fired, which means that the NYT is probably right in describing it as "unexploded". The fuze cap is missing but the fuze looks to be still in place, which makes it rather a hairy piece of furniture to be playing with. (The illustration on the right shows the shell with a "lifting ring" at the top, in the place where the fuze is fitted before firing.) 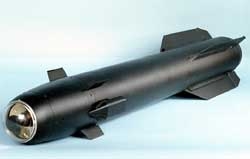 So, what's the big deal? Well, the US strike was undertaken by a Predator UCAV, the only weapon-fit for which is the Hellfire missile (illustrated). Whatever else, the picture used does not even begin to show the remains of a such a weapon.

The point, of course, is that the mismatch between the picture and the text is easily detectable and shows, at the very least, an appalling lack of professionalism on the part of the NYT. It also tends to support the thesis that the NYT is slanting its coverage to match its anti-administration slant – the set-up of the photograph inviting empathy with its subjects.

Whatever view you take of the cause of the "error", it casts doubt on all the details attributed to the photograph. It is attributed to "Thir Khan/AFP--Getty Images" – AFP not being the most reliable of sources. How do we know even that it was taken in Pakistan at the scene of the strike? Its computer file-name is "14cnd-afghan.583x404", which might even suggest it was taken in Afghanistan.

Crucially though, if you cannot trust the caption text, how can you trust the text of the article accompanying it? Any errors there are not so easily detectable and you have to take the details on trust. But, if the editorial staff cannot even get such obvious details right in the caption, any such trust would be misplaced.

This is the great "professional" MSM in action – or an example of it – so full of itself and its virtues. And without the blogs, it would have remained unrecorded.