And now we get the bad news 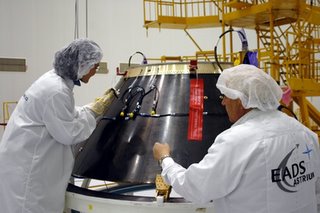 After the huge triumphalism of the launch of the GIOVE A satellite on 28 December, only now do we learn that the cost of the EU's Galileo satellite navigation programme has been hugely underestimated.

This is from the Financial Times Deutschland via Heise online which tells us that, even before all the costs have been reckoned up, the system is already a third more expensive than planned

The initial phase is now going to cost a total of €1.5 billion alone, as against the original estimate of a €1.1 billion for both the development and the subsequent validation phase.

This was to be financed partly by €550 million from the EU's scientific research and technological development budget, with the other €550 million coming from the European Space Agency.

The increased bill is blamed on "delays and rising costs" and the new estimate to complete the full 30-satellite deployment stands at €3.7 billion. The cost for the set-up phase, to get the system into operation - currently estimated at €2.2 billion – is not even known.

However, not all is lost. The commission is standing by its promise that it will "endeavour to promote the use of satellite radio navigation in its initiatives in various areas such as emergency calls, maritime safety, fishing and agriculture in conjunction with the GMES (Global Monitoring for Environment and Security) system, the interoperability of railway systems (ERTMS), justice and home affairs, etc."

The "etc", of course, covers road charging systems, defence equipment and air traffic control so, when the final – and no doubt massively inflated – bill comes in, the commission will have already been working out the new EU legislation which will enable it to charge us all for what has been described as the CAP of the sky.

And, in accordance with our policy of slagging of the increasingly useless MSM, what is the betting that nothing of this gets into the national newspapers? As for the BBC – don't even think about it.