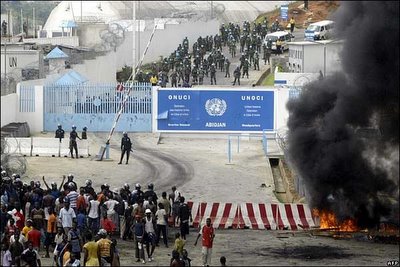 No, not against Iran – wouldn't want to upset the Russians, would we? This is the Ivory Coast which is now tottering on the brink of renewed civil war after at least five people died in violent confrontations between UN peacekeepers and supporters of president Laurent Gbagbo.

Young "patriots" have been blocking the streets of Abidjan, the country's economic capital, for the third day to protest against a proposal to dissolve the pro-Gbagbo national assembly. And, in the town of Guiglo, west of the capital, UN troops from Bangladesh fired on protesters who tried to storm their compound. Officials said at least five people had died.

In response, according to Reuters, France's top-ranking soldier, Army Chief of Staff General Henri Bentegeat, has called on the international community to impose sanctions on the government of Ivory Coast.

A short chronology of the most recent events is provided by Reuters, but what is fascination about the general media coverage – for those few newspapers which chose to cover it – is the one-dimensional reporting. 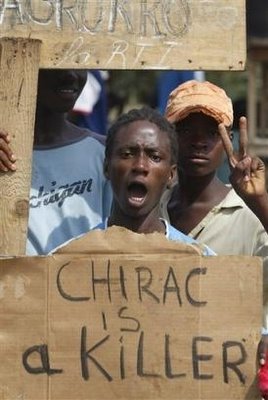 Nothing comes over of the role of the French as the former colonial power, and its interference in the government of a supposedly independent country – to the extent that the current instability is largely the result of that interference.

Equally, there is no reference to the allegations of the disgraceful behaviour of French troops, or any reference to the fact that the Ivorians loath and detest the French and the UN troops, whom they regard as an occupying power.

But most interestingly of all, no one seems to have thought incongruous the intervention of a French general in an obviously political issue. Least of all has there been any suggestion that, in seeking to lay the blame for the unrest on the civil government in the Ivory Coast, Bentegeat might be indulging in a less than subtle form of damage limitation. 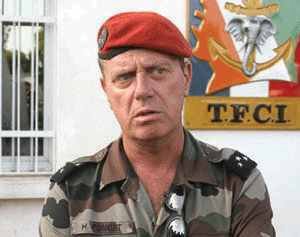 Our readers might recall that the former commander of the French forces in the Ivory Coast, General Henri Poncet (left), has been suspended and is under investigation for "complicity to murder". They will also recall how the shock-waves of this affair have reached the very top of the Army and political establishments. How convenient it is, that the news should be buried under a general wave of unrest.

And what of the UN response? The current unrest has "drawn angry comments" from SecGen Kofi who, we are told by The Independent has come close to accusing president Gbagbo of fomenting the protests "to impede the efforts of a UN-sponsored peace process to broker an end to the conflict". Annan has protested against "the orchestrated violence directed against the United Nations ... as well as the inaction of some national authorities in responding to the situation".

How familiar this all is. When my co-editor wrote about the travails of the Ivorians back in November 2005, she remarked on how the French were then going far beyond the purported UN mandate, and was "ready to lay odds" on Kofi approving ex post facto their actions, which indeed he did.

With some prescience, she also remarked that "the end remains nowhere in sight." It is still nowhere in sight for this once prosperous but now unhappy country, and less so for the meddling of our gallant EU ally, France, and the dark incompetence of the UN – all of which is strangely unreported by the media.

Still, at least we can rely on The Telegraph to tell us what is important.