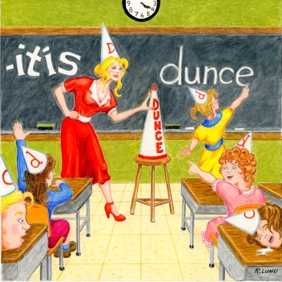 The first of the leaders refers to its front-page story which reports a "groundbreaking study of 10,000 children". This reveals that 11- and 12-year-olds are between two and three years behind where they were 15 years ago in terms of their ability to think and reason, confirming the worst fears about the breakdown of the education system. It also destroys any hopes of the UK assisting the EU in achieving that oft-touted ambition of the "Lisbon agenda", becoming a "knowledge-based society", thus making "Europe" the "most dynamic and competitive" economy in the world by 2010.

The study, says the leader, has demonstrated "beyond peradventure" that children are regressing and becoming less capable. So, it observes:

This is ground-breaking stuff, with huge implications not just for British education but the country’s ability to compete and prosper in the 21st century. So nobody should be surprised that it has been almost wholly ignored by the British media: only The Spectator website (a sister publication of this newspaper) bothered to follow it up properly. Plain folk might regard it as a devastating indictment of our increasingly frivolous media that it did not dominate every front page and lead every news bulletin. But that would be unfair: the media had a dying whale in the Thames and the sexual peccadilloes of minor Liberal politicians to cover (to say nothing of a minor UKIP MEP ed), obviously far more significant than a story that raises grave concerns about the nation's future.

The paper continues on this theme in the second leader, noting that:

Fundamental questions of national strategy and defence procurement still make front-page news in America, France or Russia; but no longer in Great Britain, where such matters are deemed less worthy than the death of a whale or married politicians visiting rent boys.

No surprise, then, that hardly anybody in Britain is aware of the quiet transformation of the country’s armed forces – and the devastating impact this will have on Britain’s influence in the world.

And this it continues in a manner that demonstrates just how infantile our MSM has become:

Last week, a new Franco-British deal was signed for a joint aircraft carrier programme designed to carry the new American Joint Strike Fighter (JSF). Britain also plans to build a new fleet of vehicles for the Army based on advanced networked information technology, a programme called Future Rapid Effects System (FRES). The combination of the carriers, the JSF and the FRES are fundamental to Britain’s current defence strategy for the foreseeable future; but the terrible truth is that every aspect of this three-pronged strategy is deeply flawed.

Because Whitehall mismanaged negotiations with Washington so badly, Britain never got agreement from America that it would have full access to the crucial JSF software codes necessary to have full control of the planes. The carriers will be delivered late and over budget. The FRES programme means buying into European systems considerably more expensive than the parallel American programme and considerably less effective; it also makes cooperation between British and American forces increasingly difficult – if not practically impossible. Given the extreme unlikelihood of Britain fighting a serious conventional war without America but in alliance with France and Belgium, this is a ludicrous development. But it is merely the latest in a string of procurement decisions aimed at making friends in Brussels rather than improving Britain’s forces. For many of Britain’s top officials, the most important thing is to be part of the latest European project regardless of how expensive, corrupt or foolish it is.

Britain’s new aircraft carriers are a case in point. They will not give Britain the capacity to project power or wield global influence; rather, they are being built to help Britain sit off the African coast with France, flying aid to corrupt regimes as part of European Union "humanitarian missions". If Britain was serious about projecting global power and influence, the strategy would be to build a new generation of bombers capable of hitting any point on earth with weapons or sensors in an hour, which is what America is doing. Such a project was begun under Margaret Thatcher but cancelled, and the patents classified, by Michael Heseltine and Kenneth Clarke who preferred European integration over the global influence they thought now beyond Britain. The Heseltine-Clarke ethos is now in the driving seat of defence procurement and security strategy; Britain’s armed forces will be diminished as a result.

This, dear readers, it what a grown-up editorial in a grown-up newspaper looks like and it is perhaps no coincidence that it alludes to several stories we have covered on this Blog (here, here, here and here). But, if that is too meaty, well, at least we can rely on The Sunday Telegraph to tell us what is important. No wonder it has lost 72,000 (10.17 percent) circulation in one month, despite its "intelligent, beautifully written features" and "high impact news stories".