Letter from America No. 3 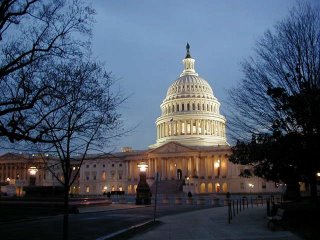 One of the interesting comments at yesterday's discussion at the Hudson Institute was made by the host, John O'Sullivan. He pointed out that anyone who really wanted to follow the Alito hearings had to read the blogs that were providing not only hour by hour reporting and analysis but also commentary and quotations from many of the participants that frequently countered their present stance.

I haven't done that as yet but I did watch some of the proceedings on TV. The Alito hearings is the biggest news here and has managed to dwarf even the Jack Abramoff scandal, though the latter might well have a deleterious effect on the Republicans' chances in the forthcoming mid-term elections.

The general agreement is that by and large Alito has done well. He has managed to by-pass the clearly political questioning by the Democrats, whose aim seems to be to overcome the fact that they are electorally challenged by trying to impose a "liberal"agenda on the Supreme Court.

Without going into any of the details, let me refer to one or two comments by Alito that impressed me. He explained to the senators that the opinions he had expressed as an advocate were one thing but a judge cannot have an agenda. A judge has no clients and no interest in the outcome of the case. The judge is there to interpret the law as the law stands.

The Democrats had also tried to pick him up on one or two cases (apart from the one he should not have taken on as there was a clash of interests) when he allegedly did not come out on the side of the "little guy". Well, there are several points in response to that. First of all, the "little guy" is not always right. Given the fact that the rather left-wing legal "clinics" that are attached to the big universities and their law departments, tend to work for some of the largest organizations as long as they are on their side of the divide and care very little about jobs for the "little guy" or the "little gal" this whole discussion is problematic.

But Alito's biggest argument is that he is the "little guy". After all, he comes from an immigrant Italian family, grew up in Trenton, New Jersey, and has made his way up, as did the rest of his family, entirely by his own efforts. Beat that, Senator Kennedy.

And that brings me neatly back to the discussion on Europe, America and the Blogosphere, which I shall describe in greater detail at a later stage. The big question is why it is that Europe, including Britain, is so far behind the United States in the development of the blogosphere.

Some of it is due to technological differences. No question about it - everyone seems to have at least one PC or laptop in this country. They travel with it, they check their e-mails all the time, they blog or read blogs wherever they happen to be.

Internet is available everywhere and the wireless (how nice to see that word again) is widely available. Wireless was described to me a magic and it is. You can just connect to the internet. No mess, no muss.

But, allowing for all of that, there are psychological differences. I shall, when writing about it in detail, go into the various arguments, but would like to leave a couple here as expressed by members of the panel and the audience.