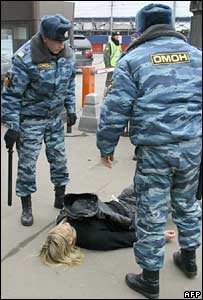 In the wake of what must be the stupidest “spy scandal” in history – the transmitter in the artificial rock – the Russian authorities have wasted no time in acting.

Let us not forget that late last year the Duma passed a law that was to put the control of NGOs into the hands of the security authorities, who acquired a great many rights. The NGOs’ lives were to be made quite difficult in administrative ways – many more forms to fill in, reports to make, officials to square.

There was also provision for shutting down or suspending organizations that undermined Russia’s security or, in any way, criticized Russia’s history and culture, this including, one must assume, the concept of authoritarianism, so ably reconstructed by President Putin and his siloviki.

The law was signed “almost secretly”, as Novaya Gazeta says, by the president, early in January, just as Russia was beginning her stint as the president of the G8. Still, he was obviously a little nervous because of the international outcry.

Lo and behold, there is a TV programme to tell the Russian people that all those nasty organizations are not really there to protest infringements of human rights or hand out money to groups in desperate need, such as orphanages and schools for disabled children. No sirree!

They are spying for the old Great Game opponent, the United Kingdom. And how are they doing it? By using a transmitter in an artificial rock (there is some doubt whether the right one was shown on TV or not), just like they do in fifties espionage textbooks.

All the same, it will end badly. The BBC World Service reports that the Russian government is already seeking the closure of one of the oldest human rights organizations in the country: the Russian Human Rights Research Centre, which is the umbrella organization for a number of well-known human rights groups, such as the Moscow Helsinki Group and the Soldiers’ Mothers.

These two have been particularly outspoken about events in Chechnya.

The Research Centre is not, apparently, being accused of espionage, merely of not filling in the requisite forms. We are told that they had not registered any information on their activity for the last five years.

The new law has not yet come into effect but the authorities are already busy.