Are we talking about the same man? 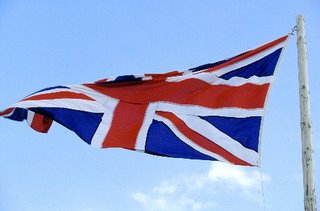 So, Mr Gordon Brown says that Britons should not shy away from showing more patriotism. It would help create a more defined sense of what it means to be British in the modern world, he tells us.

Amongst his other sayings today: We should "embrace the Union flag", a symbol which has become increasingly associated with the far right or hooligans. "We should assert that the Union flag is a flag for tolerance and inclusion." "All the United Kingdom should honour it, not ignore it...".

Er… excuse me. But a little niggle in the back of my mind reminds me that Mr Brown has lectured us about "patriotism" before – 10 June 2003 comes to mind when he was making the "patriotic case" for Britain's role in Europe, taking on the "myths and prejudices" about membership of the EU and the euro.

And that was when the chancellor was telling us he believed "substantial progress" could be made to ensure the British economy is in a position to start the process of joining the single currency in 2004. Are we talking about the same man?

Anyway, I think we'll pass on this one. The British have never felt the need to parade their nationality or their "patriotism", and certainly don't need any lectures from a Labour politician who clearly doesn’t know which way is up.