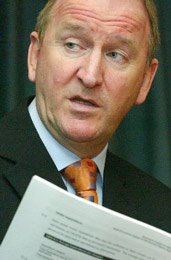 It would be hilarious – if you are into that sort of thing – if it wasn't so er… hilarious.

That brave country Scotland, having struggled under the yoke of its English oppressors for so many centuries and having regained a degree of independence, has its ministers now scurrying around trying to please their new masters in Brussels – and getting it hopelessly wrong.

Their great faux pas – since we are into things continental – was to devise a pension plan for their oh so diligent and dedicated council workers. But, deeming that their masters across the water had stopped them letting the poor dears on the gravy train at the tender age of 60 - because of "anti-discrimination laws" - they adopted a fiendish plan called the "85 rule".

No, dear readers – unfortunately they were not going to keep these good and faithful servants in harness until they were 85 years of age. This was one of those enlightened and imaginative bureaucratic devices which allowed the ancient crones (not) to down tools when the total of their calendar age plus their years of faithful (and not so faithful) service reached 85.

Promoter of this fiendish scheme, finance minister Tom McCabe (pictured), claimed he had no choice but to adopt it – following his former English oppressors who had actually devised it – because to do otherwise would break EU directives on age discrimination.

Enter Katharina von Schnurbein, the commission's spokeswoman on employment, social affairs and equal opportunities. Not so, she tells young Tom, custodian of the treasure of that brave country Scotland, which has struggled so long under the yoke of its English oppressors. Article 6, no less, of the relevant directive gave governments the scope to treat people differently on the grounds of age in certain circumstances.

Adds Ms Von Schnurbein sternly, "It's an artificial debate and is only going on in Britain. The directive has no influence on pension value or pension age. It is completely up to the member state. If they think it is reasonable for people to retire at 60, under EU law that is perfectly legal."

Not good enough says the spokeswoman for the Scottish Executive, a representative of that proud, independent government that came into being after Scotland had struggled so long under the yoke of its English oppressors. "We have received legal advice which concluded that the rule was inconsistent with the directive on the grounds of age discrimination. Based on legal advice, we will pursue this option." We will follow our English oppressors (not) along the road to perdition. The old crones shall not go free.

Oh, Scotland the brave! We are so proud of you.