They just don't go away 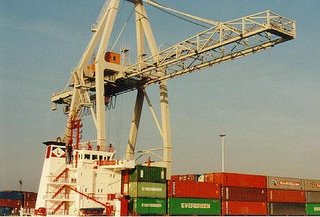 "Not one crane is moving," union spokesman, Uwe Schroeder, said. This was Hamburg docks yesterday, as 4,500 workers went on strike to express their opposition to the EU's ports directive.

According to the International Herald Tribune, they were amongst the tens of thousands of dockworkers in several European Union countries who went on strike yesterday, protesting against the plans to "liberalise" cargo handling at seaports in the member states, allowing "self-handling" of cargo by ships' crews.

The European Transport Workers' Federation said a total of about 40,000 people were participating in 12 countries to protest against the directive. Supporters, according to IHT, said the directive was needed to cut costs, speed deliveries and encourage investment in ports across the 25 EU countries. Dockworkers' unions said they feared it would lead to lost jobs, lower wages and less safety. They want qualified stevedores to continue doing dock work, arguing that the job is too specialised to leave to ships' crews.

Yet, we have been here before. This is the proposed directive that was first introduced in 2001 and "torpedoed" by the EU parliament in November 2003. It was then re-introduced in October 2004 as one of the last acts of the outgoing commissioner for transport, Loyola de Palacio.

There is, of course, much more to the proposal than "self-handling". The directive seeks to impose rules governing the right to provide cargo handling services within a port, licensing operators to provide such services to as yet undefined "competent authorities" for limited periods. Licences would be for a maximum of eight years where no investment is required; 12 years where the licensee invested in "movable assets" such as fork-lift trucks; and 30 years where it paid for "immovable assets" such as new warehouses.

Back in 2004, David Ord, managing director of Bristol Port Company pointed out that the directive made partial sense on the continent, where the big ports are state-owned, run by comfortable cartels which can set their own charges and conditions, seeing off competitors and stifling free-enterprise and innovation. The commission was trying to achieve is "intra-port competition" (competition between providers of a same port service within a port).

However, in the UK, the industry is structured differently. We have already gone through our denationalisation and have a network of private ports, which thus creates a competitive environment between ports, so the directive would simply hamper and disrupt the UK structure for no gain.

But this is not what the continentals are complaining about and out lot will certainly not be joining them in the a demonstration in Strasbourg on Monday, when the EU parliament meets to debate, once again, a directive it has already thrown out.

And, if the parliament does not throw it out again, this country will again be suffering from another "one-size-fits-all" directive. Even if it is rejected, however, you can be sure that the commission will have another go. As all our readers know by now, they just don't go away.