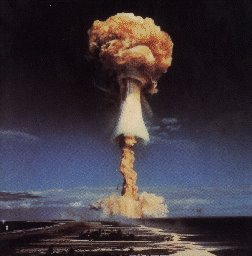 The “unilateral cowboy” as Little Green Apples refers to him or as we prefer to call him, l’escroc Chirac has announced that France is prepared to use its nuclear weapons if any other state will threaten it with terrorist attacks. He did not specify which other state he may have had in mind.

As reported by the BBC, Reuters, Bloomberg and numerous other news agencies, l’escroc announced at L’Ile-Longue, a nuclear submarine base in Brittany that leaders of states, who

“use terrorist means against us, just like anyone who would envisage using, in one way or another, arms of mass destruction, must understand that they would expose themselves to a firm and adapted response from us.”

These responses could be of conventional kind or of a “different kind”.

“"In numerous countries, radical ideas are spreading, advocating a confrontation of civilisations," he said, adding that "odious attacks" could escalate to "other yet more serious forms involving states".”

I don’t think anyone has actually thought of this before, have they. What exactly would have been Chirac’s reaction (not to mention SecGen Annan’s) to statements like that from President Bush? Will France in its born-again capacity as defender of something or other, support the United States in future dealings with terrorist states? Will it support Israel? Questions, questions.

Come to think of it, France is one of the EU3 (with Germany and the UK) that has brought us all to a sorry pass in their interminable and pointless negotiations with Iran. Is that one of the countries l’escroc had in mind?