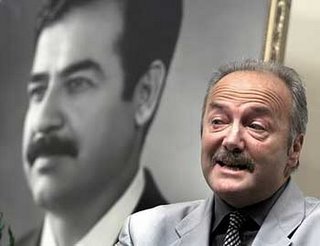 Somehow it seems appropriate to write about George Galloway’s troubles on the anniversary of Lenin’s death. (Yes, I know, it was actually yesterday, January 21, but the sun is shining and I am still celebrating.)

So what else can go wrong for Gorgeous George? Two separate reports, by the Senate Commission and the Volcker Commission, came up with different sets of documents that show the same thing: money was going into his or his wife’s accounts from the oil-for-food scam. He has denied it all but has not, as yet, agreed to answer questions directly. I am sure Senator Norm Coleman is devastated.

He has managed to alienate a few (not too many, admittedly) people by his nauseating fawning on the Boy Assad, as Mark Steyn calls him, and by rushing up for a little cosy fireside chat with Fidel Castro.

All of that was as nothing compared to his decision to join the list of fading celebs in the Big Brother House and bringing disgrace to the good name of the feline by his antics. Up with this even his left-wing cronies will not put.

Most interestingly, while in the House (where, I understand, he has managed to annoy and upset his housemates) and, therefore, incommunicado, he has managed to sign a number of Early Day Motions in another House, that of the Commons. Given that he does not precisely frequent the place even when he is not miaowing and lapping milk, the achievement is impressive.

Now comes the unkindest cut of all. Thanks to Little Green Footballs, we find out that an Islamic organization has issued a fatwa on the wretched Galloway. Strictly speaking, it is not clear whether they can do so, but they have done it nevertheless and using language that is distinctly fruity.

“Recently, Allah (SWT) has disgraced these so-called Muslims and the one they have associated with Allah, George Galloway, by causing him to appear on a reality TV show "Celebrity Big Brother". Shows such as this contain all the corruption Allah (SWT) has forbidden, such as free-mixing, fornication, drinking, nudity, swearing and many other abominable acts. These kinds of programmes attract only the lowest of the low who desperately seek recognition and fame by any means possible.

They are people who have no honour, respect or dignity and can only be described as animals. George Galloway will certainly have no trouble fitting in as he has all the criteria the show is looking for. Just recently, the media has shown George Galloway at his best – behaving like a cat (animal) purring at the hands of a woman. This is not surprising as one cannot expect anything more from a person of such low intellect and morality, a representative of those who voted for him.

Furthermore, we all saw how Allah (SWT) humiliated and exposed the hypocritical (munaafiq) organisation based in the East London Mosque, Islamic Forum Europe, after Mr Galloway's election victory last year. They were shown on television, and in newspapers, carrying the najas (impure) Galloway on their shoulders, celebrating and parading the one they had shamelessly associated with Allah in order to gain some worldly benefits.

Dare I say that language like that makes one purr with pleasure?