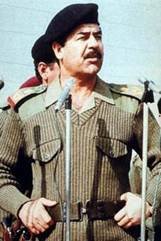 Back in the old country I feel as if I may have scattered my brain cells over the Atlantic. No doubt, some kind person will collect them and send them to me at some point.

The first story I found on my return was the extraordinary row that is developing in Germany about what exactly is meant by war against terror and, more to the point, what was Gerhard Schröder up to in government.

According to ISN Security Watch, the trouble began when an unnamed Pentagon official pointed out that the German federal security service, the BND, helped the American forces actively during the war in Iraq, locating a certain convoy of Mercedes cars, one of which may well have been carrying Saddam Hussein.

This caused an enormous row for several reason. One is the obvious one of Schröder’s supposedly tough anti-American political stance. As our readers will recall, he won his second term almost entirely on his opposition to the war in Iraq and even tried to use the theme in the last election campaign against Angela Merkel.

Could this have been simply a smoke-screen, the German media and politicians are asking. Did Germany, in fact, help the United States a lot more than it admitted to? The Greens are particularly furious, as they opposed the war with might and main and feel that they have been betrayed by their partners the Social-Democrats.

One of them, Hans-Christian Ströbele, told a news conference:

“The whole affair is so unbelievable that I am almost speechless. If the story is true then this has to have political and personal consequences.”

Of course, no politician ever goes completely speechless but he is right in that there are likely to be certain consequences.

Renate Künast, the Green Party leader, described the possibility of Germany helping American bombings as “monstrous”, though she did not exactly explain why it should be considered “monstrous” to try to get Saddam Hussein.

While questions are being asked about former Chancellor Schröder, who has been in trouble already over his job with the Russo-German gas consortium that he had pushed through when he was in office, the man whose political future is in more doubt is Foreign Minister Frank-Walter Steinmeier, who at the time oversaw Germany’s intelligence services as the head of Schröder’s chancellor’s office.

Herr Steinmeier at first said that there had been no activity on the BND’s part, then explained that agents had remained in Iraq (not, presumably, the only country’s agents) but supplied information only about non-targets like schools and hospitals to try to prevent American attacks on them.

There is some speculation that the BND, in fact, continued to co-operate with the Americans and, indeed, wage a war against terror in defiance of Schröder’s government.

“Last month, it surfaced that German security officials had questioned a German-Syrian terrorist suspect in a Damascus prison in 2002 at a time when the government said it had no idea of his whereabouts.

Steinmeier also had to admit that BND officials had interrogated terrorism suspect Murat Kurnaz in his prison cell in the US military prison camp at Guantanamo Bay, Cuba. Kurnaz is a Turkish national but has lived his entire life in Germany.”

Some German politicians are calling for an open committee enquiry, but that needs a 25 per cent approval vote in parliament. Some Social-Democrats will support it but others may be wary of what else might come out about the last government.