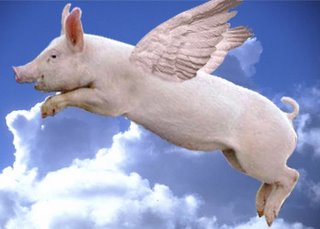 The blog Little Green Footballs (thanks for the brilliant pic) calls attention to an interesting development as far as EU financing of the Palestinian Authority is concerned.

On her visit to the area Benita Ferrero-Waldner, the EU Commissar for Foreign Affairs (not to be confused with Javier Solana who runs around pretending to be European Foreign Minister) has announced that half of the €70 million ($84 million, £48 million) allocated by the EU to the PA in November of last year has not been released and is, in fact, under discussion.

Could this be because there is uncontrovertible evidence that money is being passed on to various terrorists? Or because Abbas recently announced that families of suicide/homicide bombers would receive decent pensions from the Palestinian Authority?

“There has to be a credible finance minister, but there also has to be a budget and the budget should also remain within the limits of what the budget has foreseen.”

I am not sure how an EU Commissioner knows about such things as budget constraints, seeing as the EU’s own budget has not passed the Court of Auditors’ scrutiny ever. But the Palestinian Authority has carried insouciance a little too far.

Its last Finance Minister, Salam Fayyad, resigned in November to run in the forthcoming parliamentary elections and none has been appointed since.

“Before resigning, Fayyad predicted aid from a World Bank trust fund [through which the EU donation is channelled] would be cut in response to ballooning Palestinian government wage costs. The trust has paid out at least $230 million to the Palestinians since its founding in 2004.”

The Palestinian economy was destroyed by the second intifada launched by the late unlamented Chairman Yasser Arafat in 2000 and the World Bank is anxious to revive it, a Palestinian state being something of a non-starter otherwise. But Ferrero-Waldner maintains that money cannot just be handed over unconditionally. Perhaps the other donors will follow suit.