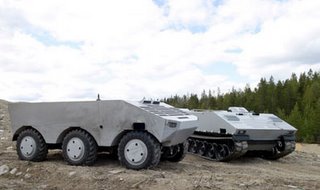 Sneaked in on 28 December when no one would be looking, is the award of yet another European defence contract, and one which firmly demonstrates the government's intention to Europeanise the armed forces.

As predicted in this blog and in my CPS paper, The Wrong Side of the Hill, the MoD has awarded technology demonstrator contracts – worth £4.8 million - to the Swedish firm Hägglunds, to develop its SEP concept (pictured above) as the basic platform for £14 billion Future Rapid Effects System (FRES). 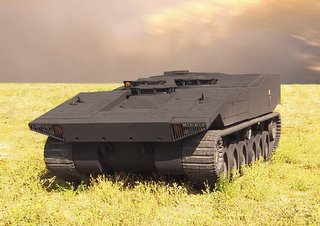 Some comfort may be gained from the fact that Hägglunds is a wholly-owned subsidiary of BAE Systems, but not a great deal. BAE Systems is also working on the parallel US project, the Future Combat System (FCS), through its US subsidiary, United Defence, having produced a test platform there, for evaluation (pictured above).

The point here is that the two arms of BAE Systems are producing respectively a European and American version of a weapons system, produced to the same concept, but very different in design and execution, driving a further wedge between British and US forces. And, since – as with aircraft and warships – much of the technology is not in the basic platform but in the electronic systems. The MoD has assigned this work to the French-owned Thales company, so the finished system is likely to be very different from the US version.

On the broader front, DefenseNews reports that the FRES project timetable is slipping badly, with one industry source stating that it would be "at least 2016 before the more sophisticated variants of FRES started entering service in the British Army."

The vehicles are the cornerstone of Army plans to equip an air-deployable, medium-weight armoured division and underpin the British contribution to the European Rapid Reaction Force, which was to have been in operation by 2010. It looks like that European military ambitions will have to be put on hold for a few years as well.