They should have expected this

Two German engineers, René Bräunlich and Thomas Nitzschke, on short-term contracts in Iraq have been kidnapped by persons unknown so far. No demands have been made. A third German national and an Iraqi also in the car have escaped but seem to be unable to throw light on the events.

The men were working at the Baiji refinery compound and, according to Deutsche Welle,

“A guard at the refinery, whose access was cordoned off, told AFP the Germans were snatched by seven men, all in army uniform, including two with officer rank.”

This might or might not mean anything. Iraqi and American forces have set up road blocks and are searching for the victims.

Meanwhile, in Germany a crisis centre was set up and meetings are going on to discuss the situation. The president of Germany's BND intelligence agency, Ernst Uhrlau, said:

“Iraq is increasingly being associated with a successful abduction industry. The people involved in this trade may have a fundamentalist, nationalist or simply criminal background. But the experience gathered over the past two years has shown us that once there are hostages, the various kidnappers in Iraq have a strong network of communication among themselves. This makes it impossible right now to say who exactly is behind the disappearance of the two German engineers.”

How very true. There is, however, a special problem associated with certain nationalities. We have seen this with the French and the Italians. Once a government is prepared to pay ransom in whatever form (and the Italian Red Cross even agreed to smuggle terrorists through Italian check points), that country’s nationals are endangered more than others. 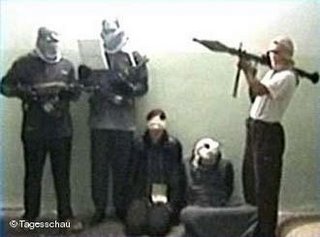 That brings us back to the still mysterious Osthoff case about which rumours (some on our forum) abound. Michael Pohly, a Middle East expert told Deutsche Welle that he was convinced the German government had paid a ransom for the archaeologist-turned-aid-worker-and-activist Susanne Osthoff.

“It can't be ruled out that the hostage affair around Susanne Osthoff has encouraged criminal elements in Iraq to go for more. Germans had not been the main target group, as far as abductions are concerned. But it certainly had an impact on the criminals' strategy that the French and Italian governments paid ransoms to free their hostages.”

Did they really not think of this?