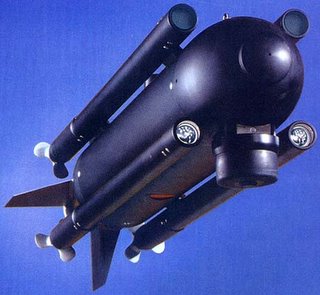 Sneaked out without, it seems, any announcement by the Ministry of Defence, yet another important contract has gone to a European supplier, this one in preference to a product developed by our own BAE Systems.

The contract in question is for an advanced mine disposal system known as Seafox (pictured above), worth "in excess of £35 million". It is to be built by the Bremen-based Atlas Elektronik GmbH, announced by the company and its British partner on 9 January this year.

Seafox, we are told, is an expendable, remotely-operated underwater vehicle that includes an explosive warhead used to neutralise the target sea mine. It is launched from the parent ship and guided to the mine using a combination of an on-board sonar and television sensors. Delivery and installation will commence early in 2007 and will continue over a period of three years. 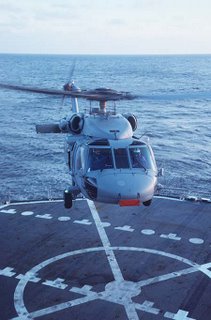 The award was given in preference to BAE Systems "Archerfish" design, which was developed privately by the company in partnership with Raytheon Integrated Defense Systems, at a cost of over £5 million. The innovative nature of the weapon was recognised during 2003 when it won a top gold award in the BAE Systems Chairman's Award for Innovation.

The ultimate accolade, however, came the same year, when Archerfish was selected by the US Navy, with the award of an $18 million programme to equip its Airborne Mine Neutralisation System programme, developing it for operations from the MH-60 helicopter.

The system was still being evaluated by the MoD in 2004 but it was dropped shortly afterwards. In January 2005 Labour MP Syd Rapson (Portsmouth, North) in whose constituency the weapon was being developed, challenged minister of state for defence, Adam Ingram, about the programme, saying: "The Americans have grabbed it with both hands … We have lost a brilliant invention, and export potential for this country." 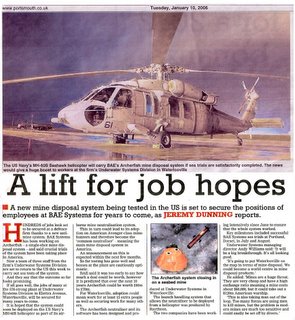 Offering no details, Ingram simply dead-batted the complaint, saying that Archerfish had been "deselected" in the competition "on the basis of its performance against the UK's requirement" – a requirement that has never been revealed.

The award to Atlas Elektronik, however, underlines another irony. At the time of the competition, the company was owned by BAE Systems. In 2005, however, BAE Systems decided to sell it, a sale that was held up when the German government refused to allow the French-owned Thales conglomerate to purchase it outright, this being considered against the national interest. 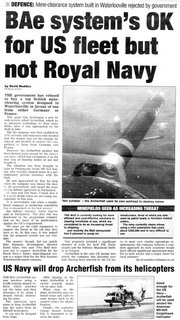 Eventually, at the very end of December, the company was sold to ThyssenKrupp and the European defence conglomerate EADS, each owning 60 and 40 percent respectively and, just over a week later, the MoD awarded the Seafox contract to it.

Needless to say, nothing of this has found its way into the national media, although the local Portsmouth papers have covered it fully – and rather well – following the defence aspects as well as the employment issues (click on illustrations to enlarge).

This of course, is merely the latest in a long line of contracts that have gone to European manufacturers, including the infamous missile system for the new Type 45 destroyers.

By coincidence, the first of this class, HMS Daring, is to be launched – weather permitting – in three days time, and event celebrated by Sylvia Pfeifer in the Sunday Telegraph. Not for one moment would you get any hint of what a disastrous project this has become from the gushing Mz Pfeifer but then, as with the Archerfish project, we have long given up expecting adult reporting on defence issues from the MSM.